After a three-year absence, does roadster still make sense? 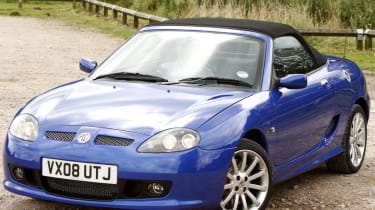 As the new owner of MG, SAIC knows the only way the British brand can have a long-term future is with an all-new line-up. The TF LE500 is merely a reminder that MG is alive. It’s not a match for modern sports cars, but it’s fun to drive, and eager MG enthusiasts Europe-wide are sure to snap up this limited edition. However, the acid test facing SAIC will be to convince new buyers with its range of fresh models.

It’s the comeback of the year! The MG badge, now owned by the Shanghai Automotive Industry Corporation (SAIC), has returned to the UK market with the TF LE500. It’s also the first Chinese car ever to be built in a developed country. And Auto Express has driven it.

Assembled at MG Rover’s old home of Longbridge near Birmingham from shipped-in parts, the MG TF could be the start of a Chinese motoring revolution which might lead to 100,000 cars a year being assembled in Britain.

SAIC is initially making 500 examples of the TF, but it’s planning a full line-up, including a small car to replace the ZR hatch; an all-new roadster (as revealed in Issue 1,011) and an MG-badged version of the Ford Focus-rivalling Roewe 550.

The last of these is a project MG Rover had been working on which has been updated by a team of UK designers.

The TF LE500 can trace its roots back to the MG F, which went on sale back in 1995. So can this version compete with modern sports cars such as the latest Mazda MX-5?

Crisp The exterior is identical to the model built at Longbridge when the factory closed in 2005. But bosses have made changes to the headlights and added a double honeycomb mesh grille, plus small LE500 badges on the front wings. The TF still looks pretty good, with crisp styling and neat proportions.

On the inside, there’s modern piano black trim on the centre console and door inserts, leather seats and LE500 chrome kick plates, plus a couple of small badges in the snug cabin.

But the dashboard buttons, indicator stalks and wipers are straight from the past. The old car’s high seating position is carried over, too. There’s a manual canvas hood that’s easy to operate, but it’s not as simple to use as a powered top when it suddenly pours down.

However, the cabin is comfortable for a two-seater sports car, and the interior is perfectly usable on a daily basis.

The mid-mounted 1.8-litre K Series powerplant produces 134bhp, and SAIC’s engineers say they’ve improved reliability. On the road, it’s willing, although it’s peppy rather than fast. Economy is reasonable at 35.8mpg on the combined cycle, as are 185g/km emissions. The TF remains good fun on twisty roads, with sharp, responsive steering, while the firm suspension means the MG is agile. Our model had less than 100 miles on the clock and the gearbox felt a little stiff, yet it was quick and had well spaced ratios.

So is there a future for the TF LE500? Critics will say it’s a car that’s stuck in a time warp. Indeed, if you’re keen on having a roadster, we would still point you in the direction of the Mazda MX-5. Nevertheless, there’s no shortage of enthusiasts keen to snap up one of the 500 models. And with SAIC working on an entry-level version to go on sale for around £15,000 at the end of the year, the Chinese firm should also succeed in selling the 3,000 models it intends to make available throughout Europe.

Rival: Mazda MX-5 Based on this test drive, Mazda has nothing to be worried about. As the world’s most popular sports car, the MX-5 beats the MG in every aspect – including price. Incredibly, the MG TF is going to cost £650 more than the entry-level Japanese roadster