The MG TF is reborn with new Chinese owners. But is it any more attractive now than when it last appeared on price lists in 2005? 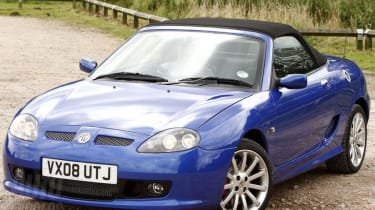 Time hasn’t been kind to the TF because it has barely changed since it debuted as the MGF in 1995. This familiarity means it struggles to make any kind of visual impact and your new pride and joy could easily be mistaken for a much older vehicle. Its compact dimensions are another indication that it has outlived its original shelf-life because it’s much smaller than its contemporaries – a sure sign of its Nineties roots.

If the exterior looks dated the interior of the TF feels positively ancient. The traditional bugbear of the MG’s driving position hasn’t been fixed, so its non-reach adjustable steering is positioned too far away and low down to get really comfortable. Overall build quality is fine but the switchgear looks and feels cheap, and storage space in the cabin is restricted. However, you do get a useful 210-litre boot at the back.

You only get one engine option in the Limited Edition TF and the mid-mounted 133bhp 1.8-litre is derived from the original K-Series unit. It is raucous under full throttle and struggles to deliver a spirited sports car turn of speed. It simply doesn’t provide the performance that the TF needs and the benchmark 0-60mph sprint takes 9.6 seconds - not enough to worry a hot supermini.

Despite its modest power output the MG TF is engaging to drive. Thanks to its lightweight design and compact proportions there’s plenty of enjoyment to be had on twisty country roads. However, the engine is loud at motorway speeds and the gearbox has a stiff shift mechanism. Its taut suspension can also make for a fidgety ride over uneven roads and the light steering is inconsistent at higher speeds, with seemingly small inputs capable of causing big changes in direction.

The MG TF might be an old design, but it comes with a thoroughly modern price tag. In fact the LE500 is more expensive than its closest rival, the entry-level Mazda MX-5. The MG does come with lots of kit, including air conditioning and a body-coloured hardtop, but it lacks the polish of its Japanese rival. Limited edition status guarantees an element of exclusivity, but with so many of the original cars still on the road its impact is diluted. Fuel economy is reasonable for a sports car, though, as are maintenance costs.

You get two airbags in the MG but it doesn’t have ESP and its design dates back to the early Nineties – a long time in terms of road safety. In its current guise it hasn’t been through the Euro NCAP process, but the original scored four stars for occupant protection in 2003. High CO2 emissions are par the course in this sector and the MG’s output of 185g/km places it in road tax band E, so an annual disc costs £170. 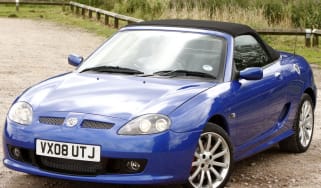 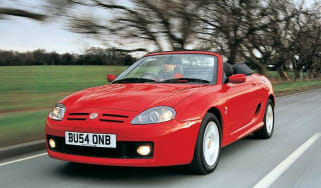 There's no beating great design... even if the car it's applied to is starting to show its age. MG's TF is the perfect example. The two-seater first a…
Skip to HeaderSkip to Content