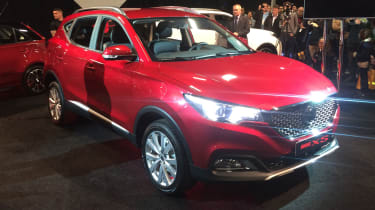 MG has renamed its new baby crossover for a second time reverting back to the car's original ZS name.

New marketing material for the crossover has been distributed with ZS branding, despite the car being officially renamed the XS at the London Motor Show earlier this year. The company has confirmed to Auto Express the switch back to the ZS name and an official announcement on the change would be made in the next 24 hours.

The new crossover will be built in China and badged as the ZS in that market. Initially, badging the car XS in the UK was to avoid a name clash between the new crossover and the Rover 45 based ZS sports saloon of the 2000s; MG itself even said that the new name has a meaning too – S standing for SUV and X standing for extra.

The new MG ZS – a fresh rival for the Nissan Juke and SsangYong Tivoli, introducing a bold new design language for MG that will eventually make its way across the brand’s line-up as its new family face.

The ZS will arrive in UK showrooms late in 2017, and though MG has not yet revealed a starting price, the firm has hinted that it will significantly undercut many similarly sized crossovers. As such, a price tag around or just under £13,000 seems likely. 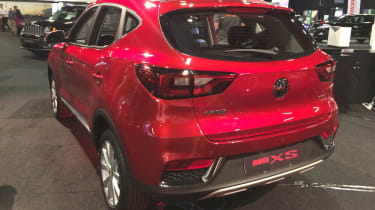 The ZS will get two petrol powertrains when it goes on sale later this year and a choice of two gearboxes. A turbocharged 1.0-litre unit will line up alongside a 1.5-litre option, but we’ll only get more official information closer to launch.

The 1.0 engine is claimed to have 123bhp and 170Nm of torque, and while the 1.5-litre petrol in the GS could be carried over with 164bhp and 250Nm, it is reported that an uprated version of the engine used in the MG3 with 118bhp and 150Nm of torque will appear in the car. It’s also suggested that the ZS will get the same six-speed manual and seven-speed dual-clutch automatic gearboxes as the GS.

In time, the ZS family will expand - electric and PHEV versions of the ZS will appear on sale within 18 months to two years. According to MG’s head of marketing Matthew Cheyne, “the proven technology is already out there, it’s just a case of adapting it to these vehicles”.

There are no firm details on what the powertrain for both model will comprise, but MG is able to turn to its Chinese parent company SAIC for assistance with powertrain development.

A plug-in hybrid system available to MG is found in the Roewe eRX5, which is a China only SUV - it features a 169bhp 1.5-litre turbo and 41bhp electric. The powertrain is likely to be detuned for MG’s smaller crossover to help reduce costs.

In terms of design, the front of the ZS has a familiar small SUV look, with the large grille and deep bumper echoing rivals such as the CX-3, especially thanks to the swept-back headlights. The rear looks more closely related to the MG GS, the ZS’s larger platform-sharing brother that’s already on sale. 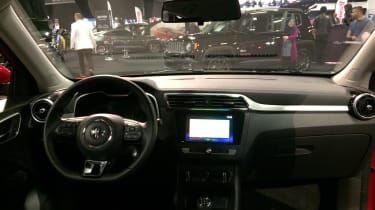 The cabin takes a step in a new direction compared to the larger GS with a fresh design, placing an emphasis on the materials and reducing clutter. An eight-inch touchscreen with sat-nav will be offered, along with an electric sunroof, cruise control, alloy wheels, a reversing camera and keyless start.

Alongside the two-powertrain and gearbox choices, three trim levels for the ZS will appear. Personalisation will play a part in the buyer experience too, and in contrast to the larger GS, the ZS will receive customisation options on a similar scale to the smaller MG 3 supermini.

Cheyne told us that the explosion in popularity of SUVs and crossovers has meant it’s a market the brand cannot ignore. In terms of volume, MG expects the ZS to account for half of its sales in the UK next year, targeting between 4,000 – 5,000 units.

What do you think of the new MG ZS? Let us know in the comments!

MG has given its ZS SUV a mid-cycle facelift, adding a few subtle styling tweaks and some extra interior technology
MG ZS review 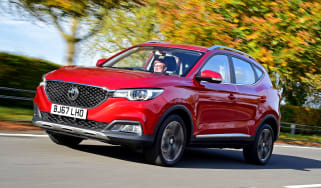 The MG ZS struggles to compete head-on in the small SUV segment, but few serious flaws and value pricing mean it’s still worth a look