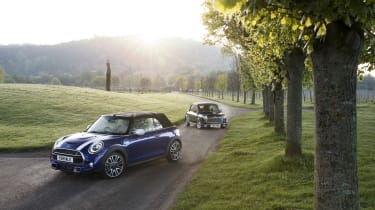 To celebrate twenty-five years of the MINI Convertible, the British company has launched a special edition version of its latest drop-top. Only 300 examples will be produced, each priced at £32,995.

Based on the latest MINI Cooper S the limited edition 25th anniversary model is powered by a 192bhp 1.6-litre four-cylinder engine, which propels it from 0-62mph in 7.2 seconds and onto a top speed of 143mph.

Inside, you’ll find all the luxuries from the top-spec model including sat-nav, climate control and a full leather interior finished in Satellite Grey, which is a unique finish for the celebration model. A unique Starlight Blue exterior, white mirror caps, a Union Jack finished fabric roof and two-tone 18-inch alloys complete the look.

The first ever drop-top Mini arrived back in 1993 and was based on the 1959 original. It was converted by German coachbuilder Lamm Autohaus, and launched in only two colours: blue or red. Under the bonnet was a 1.3-litre four-cylinder engine. While this original Mini was twice the price of the Cooper 1.3i it was based on, Rover managed to sell all 75 that were built.

The current MINI Convertible was launched four years after BMW took ownership of the MINI brand in 2000. The British firm claims that the latest model is now the best selling convertible in the UK market.