This mid-life facelift for the MINI Cooper S Convertible hits the sweet spot, offering both performance and value 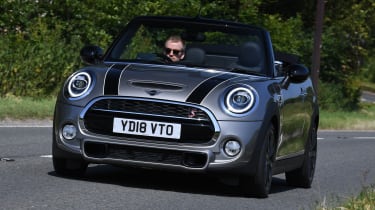 Judged on its merits as a small and fun drop-top, the MINI Cooper S Convertible hits the sweet spot. It boasts an excellent blend of performance and value – and this mid-life facelift keeps things fresh. This isn’t the particular MINI Convertible we’d choose, however – the regular Cooper version serves up very nearly as much fun, is more affordable and is cheaper to run. It’s where our money would go.

We’re big fans of the MINI Convertible – so much so we recently named it our 2018 Best Convertible in the Auto Express New Car Awards. We love this small drop top for its honest driving experience, plush cabin and affordability.

Of course, 2018 heralds a facelift for both the hatchback and Convertible versions of the smallest MINI model, and the refreshed cars are now here and on sale in Britain.

Subtle alterations are the order of the day. New LED headlights are found at the front, and you’ll spot the new Union Flag motif taillights around the back, too. Visually, that’s your lot really – the only other design changes include new badges, new colours, and new alloy wheel designs. 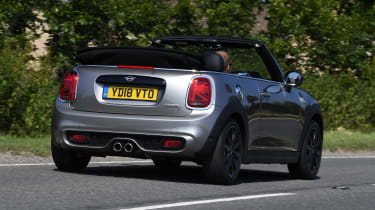 Instead, MINI has looked to update on-board tech, while the MINI Convertible can also be personalised through the new MINI Yours Customised service. The car’s dashboard, indicator scuttles, sill plates and puddle lamps can all be tweaked, adding even more personalisation to a car already suited to being tailored exactly how customers want it.

Every car in the MINI Hatch and Convertible line-up now features a 6.5-inch touchscreen infotainment system, with a new, larger 8.8-inch unit on the option list. Sadly, Apple CarPlay remains an extra you’ll have to fork out for, and Android Auto isn’t available just yet.

Driven here is the car occupying the middle rung of the line-up. With 189bhp and 300Nm of torque on tap, the Cooper S packs a proper punch, more or less encroaching on territory occupied by the latest Ford Fiesta ST when it comes to power. Of course, the MINI Cooper S Convertible isn’t as serious a driver’s car as any bona fide performance supermini – but that’s not to say that it isn’t fast nor fun to drive. It is, in fact, both.

Losing the roof means it lacks the ultimate body control and stability of the Cooper S hatchback, but it’s still a car you can safely chuck through a series of bends. Things are only improved by the delightfully quick steering and backed up by the firm suspension set-up you can lean on fairly hard.

The trade-off, of course, is that the Cooper S Convertible could be a bit more cosseting at lower speeds. In town, and on less ideal roads, it will find bumps and cracks regularly here.

The engine is punchy enough to ensure that the Cooper S has genuine pace. It revs nicely low down and through the middle of its powerband – with a satisfying growl, too. Things become a bit whiny and artificial at the engine’s top end though. We’d probably recommend sticking with the six-speed manual gearbox as it’s a slick shifter. The automatic isn’t bad either, but it’s a £1,700 option.

From a packaging perspective there’s no denying that the rear bench and 215-litre boot are both a bit tight. Getting two large adults in the back is a squeeze. As the fabric hood rests on the rear of the car, which means visibility isn’t too great with the rood down, either.