After a short teaser campaign, Mitsubishi has pulled the covers off a new SUV concept at the Tokyo Motor Show. The e-Evolution is a fully electric preview of the brand’s adventurous future strategy, but it also promises performance to live up to the ‘Evolution’ name, which was last used on Mitsubishi’s rally-inspired supersaloon, dropped back in 2016.

The e-Evolution introduces a coupe-SUV shape, with a new take on the brand’s ‘dynamic shield’ front end. It gets stretched-back headlamps and a blanked, gloss black front grille, hinting at its electric powertrain and lack of engine. The glasshouse wraps around to the C-pillars, while the windscreen is steeply raked and curved. 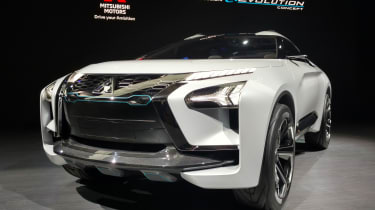 Mitsubishi says the rugged stance and sloping roofline express “the readiness to grip the ground with all four wheels, and the agility of a high-performance cross-country tourer”. Inside, the concept features a wide central infotainment and navigation screen, flanked by two smaller displays relaying images from cameras used instead of door mirrors. The instrument panel sits as a floating pod, and the steering wheel is a half-rectangle shape.

Mitsubishi says the car uses an artificial intelligence system that monitors the driver’s skill level with various cameras and builds a training programme to improve it. The brand claims the wraparound glass makes it feel more like a jet fighter than a car.

Power outputs have yet to be released, but the e-Evolution uses three electric motors; one powering the front wheels, linked to a pair of motors at the back to offer four-wheel drive. An Active Yaw Control system features, as does torque vectoring. The concept effectively serves as a technology preview, but the brand is expected to launch a number of fully electric SUVs in the next five years.