The Mitsubishi ASX is offered with a single body style 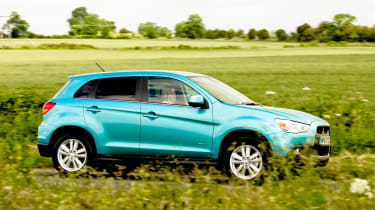 The ASX shares its platform with the longer Outlander – both models share the same wheelbase, but the ASX has a shorter rear overhang, reducing the size of the load space. One of the largest differences is under the bonnet. Mitsubishi offers one engine, it’s 147bhp 1.8-litre diesel engine – the 1.6-litre petrol engine available in the passenger variant is not available in the 4Work. The van is a conversion of the car, with the rear seats removed and replaced with a load floor. The rear doors are retained, with panels replacing the windows, giving good access to the load space. The result is a van with similar load capabilities to a hatchback van like the Ford Fiesta Van but with part-time four-wheel drive giving off-road capability.

One of the ASX’ greatest assets is the 1.8-litre diesel engine, designed by Mitsubishi with some smart technology to reduce fuel consumption. The result is combined fuel economy of 54.3mpg and CO2 emissions of 138g/km. That’s much lower than the SsangYong Korando CSX, with combined economy of 45.6mpg or the Peugeot Partner returning combined consumption of 53.3mpg. A group 7 insurance rating is also low and similar to the Korando. The SsangYong has the edge when it comes to service intervals, though. The ASX 4Work needs servicing every 9,000 miles/12 months compared to the Korando’s 12,500 miles/12 months or the Partner ATV’s 12,500 miles/24 months.

The ASX conversion to a van involves removing the rear seats and replacing them with a flat load floor and front bulkhead. The side windows are then panelled in and a full-height front bulkhead is fitted to protect driver and passenger from a shifting load. Since the ASX is a compact crossover model, it’s not surprising that its dimensions are compact for a van, too. The wheel arches take up a fair proportion of the load area, so the width between them more or less determines what can be carried. At 1.2 cubic metres, the ASX load space is marginally smaller than the SsangYong Korando CSX, probably the ASX 4Work’s closest rival. The Korando seems to have a slightly longer and narrower load space, although the ASX will carry over 100kg more in payload. A hatchback van like the Fiat Punto Van can carry 520kg and offers a slightly smaller load space, but obviously lacks the ASX’s off-road capability. The rear doors improve access to the load area, a common problem with most three-door hatchback vans, where the load area can only be accessed from the tailgate. Although 4x4 vans are comparatively rare, there are other alternatives to a 4x4 pick-up truck for those needing off-road capability. The Citroen Berlingo offers a standard small-van load space with 661kg payload. The model is very similar to the Peugeot Partner. Both models have raised ground clearance and PSA Peugeot Citroen’s grip control system that uses ESC electronic stability control to provide maximum grip, without the complexity and weight of four-wheel drive. The Peugeot Partner ATV can carry a gross payload of up to 850kg. Both the Peugeot and Citroen offer almost three times the load space of the ASX 4Work, with significantly greater payload potential. The ASX 4Work will tow a braked trailer weighing up to 1,400kg, not as much as the Korando, which can manage up to 2,000kg.

The ASX is still comparatively new and with it the 1.8-litre diesel engine, but neither appears to be suffering from major problems. There are reports of minor electrical issues and heavy front-tyre wear, but otherwise, build quality appears to be good and fuel economy better than expected for some drivers. The ASX 4Work comes with several items of safety equipment including driver, passenger and front side airbags, as well as heated and electrically adjustable door mirrors. A full-height bulkhead is also standard equipment and reversing sensors are also included. The SsangYong Korando offers a similar level of safety equipment. ESC is standard equipment, but called Active Stability Control by Mitsubishi.

The 147bhp power output ensures that the ASX pulls willingly and is an agreeable vehicle to drive. There's plenty of power on tap for running fully laden or over long distances. It has a six-speed manual gearbox as standard, which helps towards the decent fuel consumption. Off-road, the ASX has a similar three-mode drive control system to the Outlander. In 2WD mode, drive is only fed to the front wheels. In 4WD Auto mode, drive is transmitted to two or four wheels if wheel slip is detected, and the system can split drive up to 50/50 front/rear. A lock mode also keeps the van in four-wheel drive in difficult conditions.

The interior has recognisable Mitsubishi features – the grey plastic of the dashboard, remote controls on the steering wheel, and the instrument and switchgear layout are common to several models. The steering wheel is adjustable for reach and rake, and it's not difficult to find a comfortable driving position. It’s well specified, too, as might be hoped for the price. Climate control, heated seats, Bluetooth connectivity, electric windows and central locking are all part of the deal. The ASX 4Work retains its soft headlining, as well, so helps to keep noise levels down. Storage space can’t match that of purpose-built vans, but there is a glove box, door pockets with bottle holders and space for smaller items in the centre console.