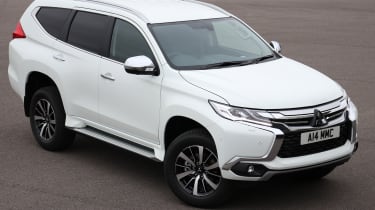 The load area is accessed via the rear tailgate or side doors, which remain in place but are blacked out to create the van space. The flat load area is nearly two metres long, while there's a meter between the rear wheelarches and a maximum height of just over a metre on offer. That means there's enough room for a Europallet on board with space to spare.

Maximum payload is only 605kg, though, so you won't be carrying as the L200 pickup truck, which the Shogun Sport is based on. Of more interest to potential buyers will be the 3.1 tonne maximum towing weight, making the Shogun Sport Commercial a great tow vehicle.

Combine this with the Super Select II 4x4 system, and the new Mitsubishi should be able to go anywhere that work demands. Included in the off-road system are settings for gravel, mud and snow and rocks, while low-ratio gears, hill descent control and lockable centre and rear diffs are fitted. 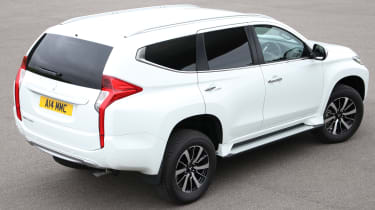 The Commercial version of the Shogun Sport is based on 4 trim from the SUV range, so it's well equipped. You get a 510W stereo with Apple CarPlay, Android Auto, Bluetooth and DAB radio, plus 2 USB sockets and a 3-pin plug socket for charging devices. Heated leather seats, LED headlights, 360-degree cameras and keyless entry and starting are all included, too. Safety kit includes a blind spot warning system and trailer stability assist.

The Mitsubishi Shogun Sport Commercial is on sale now, priced at £32,504 (ex VAT). That's around £4,000 more than the similar Toyota Land Cruiser Utility Commercial LWB, but the Mitsubishi does come with more standard kit

Would you pick the Shogun Sport Commerical over the Land Cruiser Utility Commerical? Let us know in the comments below...