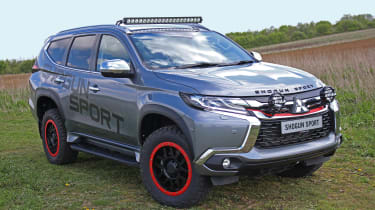 Mitsubishi debuted the Shogun Sport SVP Concept at this year’s Commercial Vehicle Show in Birmingham. The concept previews the Japanese manufacturer’s planned SVP package, which will feature a host of off-road specific upgrades to the standard Shogun Sport when it goes on sale this summer.

The SVP Concept is powered by the same turbocharged 2.4-litre four-cylinder diesel engine as the regular model, producing 179bhp and 430Nm of torque. 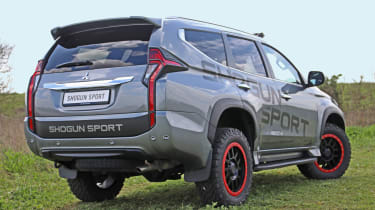 Performance is fed through an eight-speed automatic transmission to all four wheels via a centre and rear locking differential and, to assist off-road, drivers get four selectable drive modes and hill-descent control.

Other additions include a set of unique exterior decals and red accents on the alloy wheels and grille. Inside, the Shogun Sport SVP Concept gets a revised set of front and rear seats with more substantial side bolstering and red LED mood lighting. Pricing for the production version Mitsubishi’s SVP package will be announced closer to its release date.

Now read our review of the standard Mitsubishi Shogun Sport. Let us know your thoughts in the comments section below…