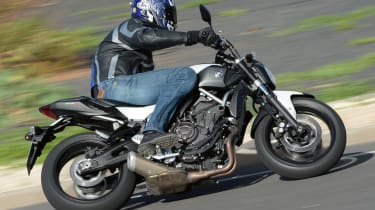 The MT-07 has been among Britain and Europe’s best-selling bikes since its launch in early 2014, and with very good reason. It combines sharp styling, a flexible and economical twin-cylinder engine, and a lightweight chassis to make a bike that is enjoyably quick, sweet-handling and easy to ride, for expert riders and relative novices alike. Equally importantly, the MT is excellent value for money, providing a blend of fun and practicality that few machines of similar price can match.

With its blend of a punchy, 74bhp parallel-twin motor and easy handling, the MT-07 follows in the tyre tracks of the great two-stroke twins, such as the RD350 and RD350LC, that helped build Yamaha’s reputation for performance and high-quality engineering in the Seventies and Eighties. The MT’s 689cc, DOHC, eight-valve, four-stroke engine means it’s a very different bike, but it shares some of the old two-stroke models’ raw feel, as well as their agile handling, thanks to its impressively light weight.

Equally importantly, the MT-07 is also very competitive in the showroom, although its current price of £6199 is £1000 more than it cost on its debut in 2014 (albeit without ABS brakes). That means the Yamaha is still less expensive than Honda’s four-cylinder CB650F, but it costs more than rival twins, including Suzuki’s SV650 and Kawasaki’s new Z650.

Even so, it’s a very appealing all-rounder, and a great entry-level model for Yamaha’s naked MT family, which also includes the MT-09 triple and MT-10 four. It has also led to other models based around the same engine, the retro-styled XSR700 and sports-touring Tracer 700.

The MT-07 is powered by a liquid-cooled, DOHC, eight-valve engine with a unique capacity of 689cc. That size was chosen not to fit into an existing market division, but because it was deemed to give an optimum balance between power, torque and economy. If anything, the emphasis is on flexibility and mid-range torque. The maximum power output of 74bhp at 9,000rpm is unexceptional for an engine of this size, but the MT’s peak torque figure of 68Nm is outstanding, and delivered at just 6,500rpm. (There’s also the option of a restricted, 47bhp version for A2 licence-holders, at the same price.)

Yamaha’s approach to the MT is highlighted by its frame layout. The backbone design minimises weight by employing a variety of steel tube widths and thicknesses, and uses the engine as a stressed member to reduce the amount of tubing required. At 182kg with fuel, the MT is exceptionally light for a bike of its performance. Its suspension is fairly basic and gives a generous amount of travel: 137mm front and 130mm at the rear. Braking is by 282mm discs up front, gripped by four-piston Monobloc callipers.

The engine is very flexible, accelerating crisply from low revs, and picking up the pace strongly through the mid-range. However, the Yamaha is also very happy to rev, and remains smooth all the way to the 9,000rpm mark, at which its maximum output of 74bhp is delivered. The bike cruises effortlessly at the legal limit and accelerates towards a top speed of about 120mph, its upright riding position and lack of wind protection adding to the rider’s sense of speed. 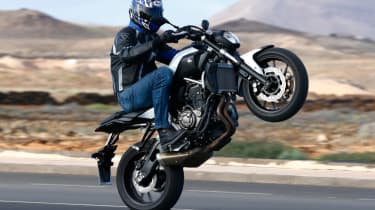 The chassis performance is similarly entertaining, and the handling is very agile, even though the MT has a wide, 180-section rear tyre that gives more grip than many rivals’ narrower rubber. At both ends, the suspension is rather soft, which at least helps provide good ride quality. However, the front forks are relatively simple units that can’t be adjusted, and the rear shock can be tuned only for spring preload. Braking is adequate, but less powerful than is suggested by the MT’s superbike-style specification of twin front discs with four-piston Monobloc calipers.

The fact that the MT is relatively cheap, both to buy and to run, is an integral part of its appeal, especially to the young and inexperienced riders with whom it’s most popular. Yamaha claims fuel economy of 68mpg, and that is not far out, because most owners average between 60 and 70mpg, although hard riding can drop the figure below 50mpg.

Service intervals are generous: 6000 miles (or every year) for the basics, including an oil change, double that for changing the plugs and oil filter, and 24,000 miles for valve adjustment. The MT’s accessibility helps to keep maintenance costs to a minimum. The parallel twin has also proved to be impressively reliable, rarely requiring Yamaha’s standard-issue warranty of two years and unlimited mileage. Being relatively light, it’s also quite gentle on consumables, such as tyres and disc pads.

The MT-07 is a simple bike, but it shows evidence of thoughtful design. The instrument panel is compact but comprehensive, for example, and the seat is thinly padded, but wide enough to be respectably comfortable, although a pillion doesn’t get much to hold. Fuel capacity is 14 litres, which is not particularly generous, but gives most riders an adequate range of over 150 miles. 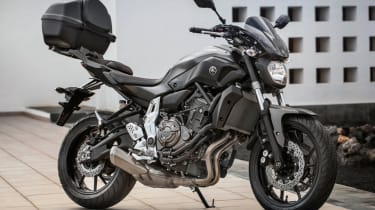 There’s also plenty of potential to upgrade the MT from an accessories list that includes practical screens, luggage and heated grips, as well as billet aluminium parts and an Akrapovic silencer. Suspension upgrades are also a popular option, especially aftermarket rear shock units, but the great thing about the MT-07 is how well it works just as it comes. Like those great, two-stroke Yamahas from the Seventies and Eighties, it’s quick, light, fun to ride and excellent value for money.