Electric cars can have green slash on their number-plates from autumn, paving the way for incentive schemes aimed at encouraging people into EVs 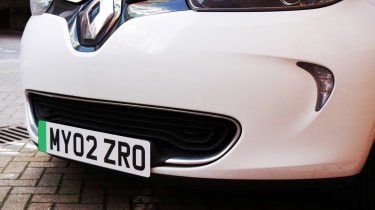 Owners of electric cars across the UK will be able to fit their vehicles with green number plates from this autumn, a move that is set to both further raise the profile of battery-powered cars, and pave the way for future incentive schemes that will encourage the take-up of electric vehicles.

Rather than being a fully green plate, EVs will have conventional white and yellow plates on their front and rear, but the plates will feature a green vertical flash on their left-hand side.

The green plates are being spearheaded by the Department for Transport ahead of a ban on the sale of all new internal-combustion engined cars from 2035, and the UK’s aim of becoming carbon neutral by 2050.

The plates will, according to the DfT, allow local authorities to “design and put in place new policies to incentivise people to own and drive” electric cars. While details are thin on the ground, the Government suggests reduced parking rates or exemption from emission-zone charges are two incentives councils might consider.

London’s Congestion Charge Zone already grants free access to the Capital’s central district for owners of EVs, using data from the Driver and Vehicle Licensing Agency (DVLA) to determine if a car is battery powered, and therefore exempt from the charges.

But, even if future clean air zones rely on the same DVLA data rather than green flashes on number plates, ministers may hope that by increasing the prominence of EVs, future car buyers may be nudged into the electric revolution, the green plates acting as something of a badge of virtue.

Confirmation green plates would be introduced this autumn follows a consultation launched late last year, with the proposals inspired by a scheme in Ontario, Canada. The Canadian programme sees EV and plug-in hybrid drivers given free access to toll lanes and car-pool lanes, even if only one person is in the car, and has led to an increase in EV purchases.

Critics, however, have raised privacy concerns over the introduction of green number plates, which could make further use of the UK’s vast network of automatic number plate recognition (ANPR) cameras.

The Government’s independent Surveillance Camera Commissioner previously warned green number plates could lead to “an unqualified extension to the role of ANPR”, a network that makes at least 10 billion number plate scans a year, and issues around £100 million in fines annually.

“Green number plates could unlock a number of incentives for drivers and increase awareness of cleaner vehicles on our roads, showing people that a greener transport future is within our grasp.”

The DfT also announced a further £12 million in funding for research into EVs and hydrogen cars, relating both to propulsion systems and infrastructure, money the Transport Secretary says will help UK firms “remain at the forefront of low carbon innovation and research.’’ A further £2 million will be made available for small and medium-sized businesses working on zero-emission research.

Commenting on green plates, Edmund King, AA president, said: “Having a green flash on the number plate may become a badge of honour for some drivers. We support this concept which shows that the EV revolution is now moving from amber to green.”

Click here for our gallery of the best electric cars you can buy right now...