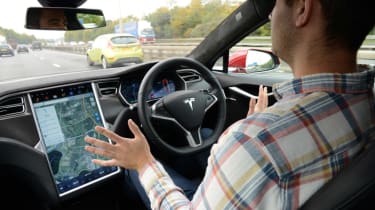 Proposed changes to road laws that would see drivers allowed to take their hands off the steering wheel and eyes off the road at up to 70mph “will put UK motorists’ lives at risk”, according to safety experts.

The Government is consulting on whether cars with an Automated Lane Keeping System, or ALKS, can be used with minimal human input at speeds up to 70mph from spring 2021. The move comes as the UK tries to position itself at the forefront of autonomous vehicle technology, with ministers wanting the UK to be “the first country to see these benefits, attracting manufacturers to develop and test new technologies.”

Drivers would potentially be allowed to watch films on in-car infotainment screens when the car is taking over driving responsibilities, but motorists would have to be prepared to step in if the system encountered an issue it could not handle. These limitations, and others, have caused Thatcham Research to warn that it “has serious safety concerns” about the proposals.

“The Government’s plan threatens road safety,” Thatcham’s director of research, Matthew Avery, says. “UK insurers and Thatcham really support automation”, he continues. “Proper automation is what we want. This is not proper automation. This does not replace a competent human driver. If you need the driver to save the day, you can’t let the driver do anything that distracts them.”

Avery says while cars with type-approved ALKS have yet to hit the roads, “the sensors we’re looking at today, we believe will be used by vehicles in the future. If technology advances, it’s got to advance by quantum leaps before it’s good enough.”

Avery and Thatcham have other concerns, including:

Instead of pushing ahead with the ideas contained in the consultation, Avery considers the Government should take a far more cautious approach.

“All of this seems like it’s not well thought through, and we’re not ready for it. Let’s call it ‘assisted’, let's introduce the technology, and let’s see what drivers do with it whilst they’re watching what’s going on.”

What is the Government proposing?

The Department for Transport and the Centre for Connected and Autonomous Vehicles  launched a consultation in August into whether drivers would be able to take their hands off the wheel, and eyes off the road, when using Automated Lane Keeping System, or ALKS.

Systems similar to ALKS are already on the road, but the formalisation of the combined technologies, and the manner of their intended use, are new, and set out in United Nations Economic Committee for Europe (UNECE) rules. ALKS is expected to be certifiable under type approval rules by early 2021, meaning the systems would be judged to meet certain criteria, and could be used on the road.

But while regulations allow ALKS to operate at up to 60km/h (37mph), the Government is consulting on if the systems should be allowed to be used at 70mph in the UK. Transport Secretary Grant Shapps says we can deviate from UNECE standards as we can “exploit the regulatory flexibilities” thanks to Brexit.

The Government insists this would be dependent on vehicle manufacturers declaring, independently from the type approval process, that their systems could operate at 70mph, however.