There's no doubt that times have been tough for the Peugeot 307. Under fire from the new Ford Focus, Citroen C4 and Volkswagen Golf, the Lion's family favourite has had to work extra hard for sales over the past 12 months. 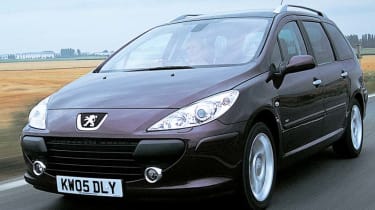 The new-look 307 SW remains much the same under the skin as only one new engine joins the range. Its sporty facelift won't put it at the top of the competitive compact family car class. But with only £200 added to the price tag, the extra kit and updated software still make it better value than its three-year-old predecessor.

There's no doubt that times have been tough for the Peugeot 307. Under fire from the new Ford Focus, Citroen C4 and Volkswagen Golf, the Lion's family favourite has had to work extra hard for sales over the past 12 months.

Now, all that effort is about to pay off. Having held its own against such tough opposition, the hatchback is getting a facelift. But do the changes go far enough? Auto Express took to the wheel of the first seven-seat 307 SW estate to hit the UK to find out.

The most obvious difference has been made to the car's nose. There's a new grille, reworked aluminium bonnet and revised bumper, adding a total of 10mm to the 4,428mm length.

Dramatic headlights, which Peugeot says are 20 per cent brighter, are complemented by circular foglamps. These are mounted low on either side of the grille. At the rear, colour-coded red light clusters have been introduced.

There are new windscreen wipers too, updated using flat-blade technology previously available only on the CC drop-top. If you shift into reverse when the wipers are already on, the rear blade is activated automatically.

Five new exotic colours have been added to the range, including the Mul-berry shade of our test car. Inside, the cabin is airy - thanks in no small part to the panoramic glass roof. The cockpit feels far more modern than before, and the outgoing 307's wood-effect trim options are gone, while chrome detailing and brushed aluminium have been added around the dials on the console and the instrument panel.

The two rearmost seats are cost options, whereas the removable middle chairs slide, tilt and fold individually. Switching between layouts is straightforward and improves practicality.

Meanwhile, the 307's standard safety features include a full complement of six airbags and new whiplash-reducing head restraints. Peugeot has also added a parking sensor and dual-zone climate control. Under the skin, an updated 140bhp 2.0-litre 16v petrol engine is now available, as well as the 110bhp 1.6-litre motor. The diesel line-up remains unchanged, comprising either 90 or 110bhp 1.6 HDi units and a 136bhp 2.0-litre HDi.

We drove the largest oil-burner in the range which, despite developing 325Nm of torque, lacks sharp response in the low gears, especially when pull-ing away from a standstill.

However, this is made more tolerable by slick shifts and well weighted steering. The ride is excellent, and the 307 proves surprisingly refined, particularly on the motorway.

Costing around £200 more than its its predecessor, the facelifted 307 SW is definitely better value. But, in the battle for a compact family car, this new look isn't enough to take it to the top of a competitive class.