How's this for a portfolio? 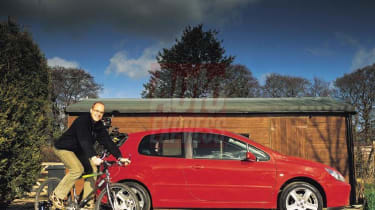 How's this for a portfolio? In its nine-month life, the Peugeot 307 has become a regular group test victor and has won the coveted Europe Auto 1 award and the European Car of the Year 2001 honour. So the French family hatchback has proven itself to the media - but how does it stand up as a day-to-day proposition?

Our three-door model arrived last November, and first impressions were almost entirely favourable. Finished in cherry red and equipped with a set of 17-inch five-spoke alloy wheels, well bolstered sports seats and an XSi badge, the 2.0-litre model certainly looks the part, even if it's neither as fast nor as exciting to drive as the styling suggests.

Yet despite being two doors short of a full complement, the 307 is hugely practical. While the back seats haven't been used too much, the enormous boot has. In my hands, it's carried everything from logs to a water butt, and all without having to fold the back seats. Which is a good thing, as they aren't the easiest to push down. But do so and there's more than enough room for two mountain bikes without having to go through the rigmarole of removing the front wheels.

By the time 5,000 miles appeared on the clock, the engine had loosened up nicely. Unfortunately, it wasn't the only thing - a list of trivial faults is dimming my opinion of the 307. Quality isn't first rate and a few rattles have developed. The indicators don't stay on properly and the door handles have become very sticky. I asked Peugeot main dealer Platt's of High Wycombe, Bucks, to have a look at them when the XSi went in for its 6,000-mile service, but the problem remains.

The first 'health check' service passed without incident - carried out free of charge, it took about 40 minutes. With a bit of luck that should mean no garage bills until the next service at 20,000 miles.

The mileage has continued to tot up at a steady rate, recently passing the 8,000 mark. But in terms of fuel economy the Peugeot hasn't been great. Having eaten up 24 tanks of petrol so far, consumption is holding steady at 26.8mpg. I'm not impressed, especially since the 138bhp powerplant is supposedly very efficient, with CO2 emissions of 188g/km. This puts it in band D tax bracket - well below such rivals as the Ford Focus 2.0 (207g/km) and Vauxhall Astra 2.2 (202g/km).

However, for cabin comfort the 307 takes some beating. True, the ride on the fat alloys isn't special, but the excellent driving position, good stowage and neat five CD in-dash changer count for a lot on long journeys.