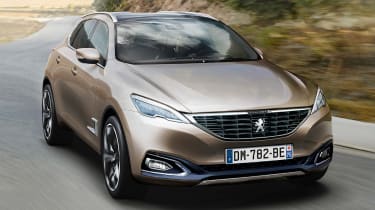 The Peugeot 6008 SUV is the brand's attempt at continuing its push upmarket in order to rival the Audi Q5 and BMW X3. It’ll be unveiled at the Beijing Motor Show next April.

Following the positive reaction to the Citroen Wild Rubis SUV concept, which previewed a new DSX model, Peugeot will use the same platform for its SUV. So expect it to be around 4.7 metres long and 1.95 metres wide.

That means it won’t be underpinned by the new, lightweight EMP2 architecture from the new 308. Instead, it will rely on bits from the 508 saloon and estate.

However, the design team will use styling features from the Peugeot 2008 and Peugeot 308, with swept-back headlamps and boomerang-style LED lights at the back.

Speaking to Auto Express, Peugeot’s director general, Maxime Picat, said: “We clearly need to be in that market.

The only question is whether it’s a 4x4. In Europe, 80 per cent of SUVs are 4x2s – we have the functionality of 4x4s with our HYbrid4 technology.”

Picat also stressed the importance of moving the brand upmarket, where there are higher profit margins on cars, adding: “We will continually push the brand upmarket – it’s a priority over the coming years. We’re also looking to improve the quality of service.”

As China is set to become Peugeot’s biggest market, the 6008 will launch there first, with European sales possible from 2016.