The Bipper Tepee is a small, van-based MPV that offers sliding side doors and low running costs 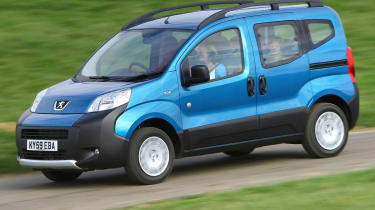 The Peugeot Bipper Tepee is the same car as the Citroen Nemo Multispace and Fiat Qubo. It's based on a van and is the smallest of Peugeot's Tepee family of MPVs, which includes the Partner and Expert. The boxy design provides lots of space, and there's sliding doors, too. There's just one diesel engine, which thanks to the standard-fit stop-start system is capable of returning 65.5mpg and emitting 119g/km of CO2. There's not a lot of kit, though.

There's just one engine, which is a 1.3 HDi diesel with 75bhp. It has a 0-62mph time of 16.8 seconds and a top speed of 99mph. A five-speed manual gearbox is fitted as standard, but a five-speed automatic is available for a premium of around £800. The engine is a bit gutless, especially at higher speeds or steep hills, but it's not a bad cruiser at motorway speeds. It handles fairly well but it does have a surprisingly firm ride, though, which means it tends to bounce over bumps and rougher road surfaces.

The Bipper Tepee emits just 119g/km of CO2 and has an average fuel consumption figure of 65.6mpg. This means low running costs and road tax will be cheap, too. A stop-start system is fitted as standard, as is a diesel particulate filter. Servicing costs should be pretty low, too, thanks to Peugeot's range of fixed-cost deals.

The Bipper Tepee is based on a commercial vehicle, and the big grille and front bumper give it a functional rather than stylish look. The cabin is comfortable and practical, but everything feels a bit cheap. There are two trim levels. Entry-level S cars come with van-like rear doors, electric front windows and heated door mirrors. Outdoor adds roof bars, air-con and front fog lights. Bluetooth and rear parking sensors are available at a cost of around £200.

The Bipper Tepee has a 356-litre boot, which increases to 737 litres with the rear seats down. This is slightly less than some of its rivals - such as the Skoda Roomster and Citroen Nemo - and quite a lot less than the Nissan Note. The seats split, fold and tumble. They can also be removed completely, although this isn't the easiest of tasks as the seats are heavy. The sliding doors make accessing the rear seats easy, even in tight parking spaces. Plus, the flat floor and high roof make loading bigger items easy. The rear seats are set higher than those in the front, which means a good view of the road ahead, but the pop-out rear windows don't open fully, and the cain can get quite stuffy in hot weather.

The Peugeot Bipper Tepee hasn't been crash tested by Euro NCAP, but the Citroen Nemo Multispace on which it's based only has a three-star rating. Standard safety kit on the Bipper is limited to just ABS and a driver airbag, while front passenger and side airbags are available at extra cost. Peugeot finished 28th out of 30 overall in the 2012 Driver Power survey, which doesn't bode particularly well for reliability.