Head-turning looks and a totally unique driving experience make the Slingshot the ultimate exhibitionists car, but it has its flaws 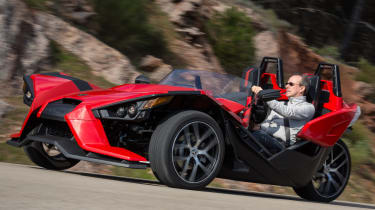 The Slingshot is an hilariously outrageous machine. There’s literally nothing else like it, both to look at or to drive. It’s left-hand drive only for the time being, although right-hand drive versions may arrive next year. At £22,999, it’s a lot cheaper than Morgan’s Three-Wheeler, but that doesn’t mean it makes much sense.

When you think of three-wheelers, do you instantly picture Del Boy’s yellow Reliant van? If so, it’s time to recalibrate your instruments. Here’s a trike that’s all about extreme performance – and extreme fun.

Welcome to the extraordinary Slingshot, the brainchild of Polaris – an American brand you might be familiar with if you’ve ever ridden a snowmobile, ATV or Indian motorbike. The Slingshot, though, is an utterly unique proposition. 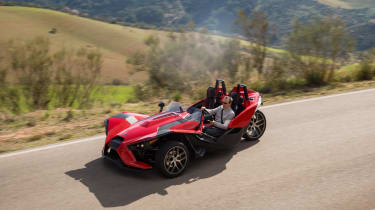 This is the only mainstream ‘sit-in’ three-wheeler on sale in the UK, other than the Morgan – which is about as far away in character as you can get from the Slingshot. Why three wheels? “Why not?” replies Polaris.

You may well be thinking that the three-wheel layout is inherently unstable. But after driving the Slingshot on some very twisty high-speed roads, we can definitively put that objection to bed. 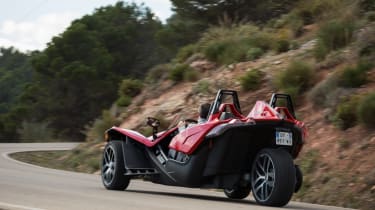 Unlike Del Boy’s Reliant, the Slingshot uses two wheels at the front, bringing far superior stability. As long as you adopt a ‘slow in, fast out’ cornering approach, you can place the Polaris with impressive confidence. Ultra-stiff front suspension all but eliminates body roll, and the huge 18-inch wheels offer masses of front-end grip.

However, you need to exercise more care at low speeds, when the back end will happily slither around if you’re too enthusiastic on the throttle. You need to brake and change down gears gently, too, to avoid rear-end twitchiness. Moving away from standstill can be hilarious: even gentle acceleration sees the single rear tyre – driven by a carbon-reinforced belt – squeal and smoke. 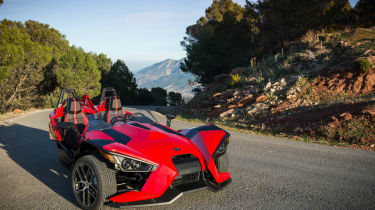 But Polaris has got the safety side of things fundamentally right, with traction and stability control working well to rein in any nervousness. That was true on the dry Spanish roads of our test, at least – what it’s like on wet roads might be more interesting.

This is a feisty performer, thanks to very low weight (786kg) and decent power (171bhp) from the GM-sourced 2.4-litre four-cylinder petrol engine. It’s hardly the sportiest-sounding unit, though, and the feeling of rather agricultural mechanicals is compounded by wooden-feeling steering, non-assisted brakes and a whining noise from the rear end. 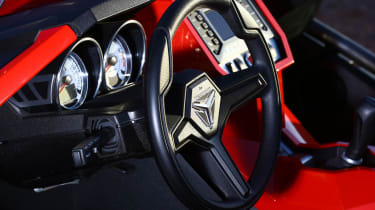 You certainly won’t be disappointed by the Slingshot if you’re an exhibitionist. Its extraordinary mash-up of science fiction shapes turns more heads than anything we’ve driven in recent times. You’d better like red, though – the Slingshot is available in any colour you like, so long as it’s Red Pearl.

The cabin is dominated by rubbery waterproof seats. You don’t feel too exposed despite the lack of doors or roof, and only a tiny wind deflector ahead of you. Buffeting is minimised so that you can drive without a helmet (perfectly legal in the UK) – unless you’re very tall, perhaps. Luxuries include USB ports, Bluetooth and a reversing camera, while large lockable pods behind the seats offer enough space for squashy bags.