Reborn classic rolls back years to give undiluted driving thrills 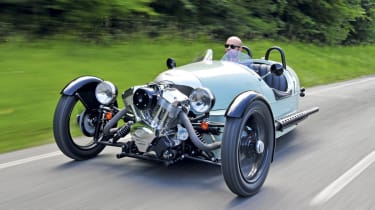 Morgan has revived a true original, and the 3 Wheeler offers a cocktail of back-to-basics motoring and vintage charm that’s difficult to ignore. There are precious few luxuries on board the spartan, low-slung cabin, and even diehard fans would struggle to use it outside the summer months. But it turns heads, is fantastic to drive and is faster than you might think, thanks to its stunning V-Twin engine.

It's been 58 years since British sports car maker Morgan last offered a three-wheeler, but now, a thoroughly modern version has arrived. The firm has taken 500 orders for the £30,000 newcomer, so what can lucky buyers expect?
On first impressions, it looks like a cross between an upturned bathtub and a WWII Spitfire. On the move, the tapered passenger cabin bobs up and down on its long-travel suspension as you skim the road.
Watch the official video of the Morgan 3 Wheeler's tail-happy handling here:
[[{"type":"media","view_mode":"content_narrow","fid":"69335","attributes":{"alt":"","class":"media-image"}}]]
There are some modern concessions – the five-speed gearbox has been borrowed from Mazda, and part of the chassis is tubular steel. But the rest of the mechanicals are as traditional as you’d imagine. The fat rear wheel is belt-driven, the brakes are unassisted and there’s no ABS or traction control.
The star of the show is the V-Twin engine built for Morgan by American company S&S. There’s an entire litre for each cylinder, and 115bhp.
Its throaty soundtrack and strong mid-range torque give the 3 Wheeler addictive performance, with a 0-62mph sprint time of only 4.5 seconds. You’ll find yourself dropping a gear to hear the roar of the side exhausts, with each shift accompanied by a sharp metallic snick from the transmission. The combination of the hefty controls, huge noise and lack of protection from the elements makes driving at anything above 50mph a very physical experience indeed – and for that, we love it.
The steering wheel squirms in your hand on bumpy roads, and the wide front track and large turning circle mean that despite its compact dimensions, it’s actually quite unwieldy. The 3 Wheeler is a superb reminder of what the thrill of driving is all about – if an expensive one.
Share this on TwitterShare this on FacebookEmail