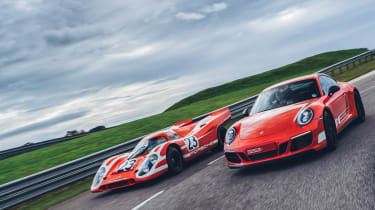 Porsche has revealed a trio of special editions of the 911 that are built to celebrate the wins of its British drivers at Le Mans. The Carrera 4 GTS British Legends Editions are on sale now priced from £122,376.

The German carmaker has taken the chequered flag at three Le Mans 24hr endurance races with drivers from the UK. The first was in 1970, with Richard Attwood at the wheel of a Porsche 917. Racer Derek Bell MBE took victory in 1982 with a Porsche 956, while the latest was Nick Tandy who won the 2015 race in a 919 Hybrid. 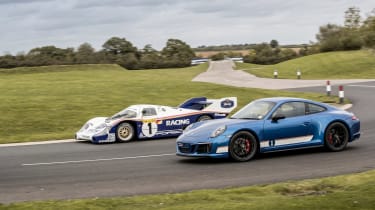 Based on a standard Carrera 4 GTS, there are three British Legend Editions available; one for each driver featuring the exterior colour and livery for their race car. Richard's 911 features Guard's Red paint with white livery, Derek's 911 is blue with white, red and gold decals, while Nick's 911 is painted white with back and grey livery. A Union Jack symbol with the driver's signature completes the look.

What do you think of the 911 British Legends Editions? Let us know in the comments...