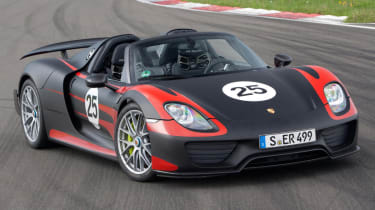 Update: The Porsche 918 Spyder will have a starting prie of €781,155, Porsche insiders have told Auto Express. The car can come with an option Weissach Pack, which brings the price up to €853,155.

All of the 918 models will be left-hand drive so there is no official price in GBP. Porsche says around 50 per cent of the cars have already been sold and it expects that overall demand will outstrip supply. Customers placing an order now will get their 918 Spyder in autumn 2014. The Weissach models are expected to make up 22 per cent of sales.

There is no set allocation for the UK as cars are sold on a first-come-first-served basis. The USA is expected to be the biggest market for the 918 Spyder.

The Porsche 918 Spyder has set a lap record for a lap of the Nurburgring in a vehicle with global road homologation. It completed the 20.6-kilometre lap in 6 minutes and 57 seconds.

After months of anticipation the production version of the Porsche 918 Spyder has made its global debut at the Frankfurt Motor Show.

The finished car is aimed straight at the McLaren P1 and Ferrari LaFerrari and like its rivals features a new hybrid powertrain that produces a total of 875bhp driving all four wheels, but also claims to return an incredible economy figure of 85mpg.

The mid-mounted 4.6-litre V8 engine shares some of its design with the brand’s Le Mans racecar and produces 600bhp on its own and it coupled with two electric motors – one at each axle – that can drive the wheels independently or work in tandem with the engine to boost performance. Drivers have the choice of five different driving modes tailored to deliver either the best efficiency or performance depending on your mood.

In ‘e-Power’ mode the 918 can travel between 10 and 20 miles purely using its batteries and will still accelerate from 0-62mph in seven seconds and reach a 93mph top speed. In ‘Hybrid’ mode the 918 alternates between using the engine and the electric motors, while ‘Sport Hybrid’ and ‘Race Hybrid’ deliver maximum power and puts the seven-speed gearbox in its most aggressive setting.

Sophisticated multi-link rear suspension and active aerodynamics should make for extremely agile handling and the 918 Spyder has a similar active rear steering system to the new 911 GT3 and Turbo models for a very tight turning circle.

Although only 918 examples will be built, customers will be able to choose between the standard car and an optional ‘Weissach’ pack – which includes an extra aero kit and bright decals – including red racing stripes or the iconic Martini racing livery.

Weissach cars also feature super light magnesium alloy wheels that shed 35kgs from the kerbweight and six-point racing harness in the cockpit. The gorgeous cabin is based on the Carrera GT with a raised centre console with touch controls for all the major functions and a manettino style switch on the steering wheel to cycle through the different driving modes.

Unlike its rivals – and as the name suggests – you can also remove two carbon fibre reinforced plastic panels in the roof for open air driving and they can be stowed in the 100-litre luggage compartment in the nose.

Joining the 918 on the stand at Frankfurt was a special edition 911 to celebrate the 50th anniversary of the iconic sports car based on the standard Carrera 4. Featuring a number of retro styling cues like Fuchs alloy wheels and extra chrome trim. The 911 Turbo and Turbo S also made their public debuts at the show.