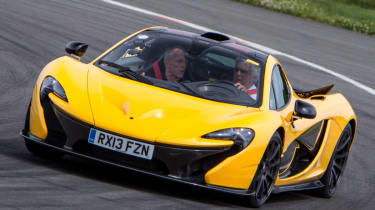 The McLaren P1 feels different from any other supercar. It’s a hybrid, and yet everything is so well integrated, you’d barely notice the electric motor. Rather than detract from the performance, it adds to it, providing a thrilling hit of acceleration. It’s usable every day in Normal mode, silent in E-mode and as focused as a serious racing car in Race mode. Following the F1 was a tough gig, but McLaren has managed it.

How exactly do you become the first person outside McLaren to drive the £866,000, 903bhp petrol-electric McLaren P1 hypercar?

Owning every McLaren road car ever made – including its legendary F1 forebear – might help. And so it was that we arrived in Dunsfold in Surrey to take the wheel of one of the most exciting cars of this century.

As we land at the old WWII air base, we’re greeted by a black and yellow prototype P1. With the same chassis and wheelbase as the 12C, the proportions are almost identical. But the styling is completely different. This is a 12C on steroids, with the wild intakes, huge rear wing and outlandish curves all carefully honed in a wind tunnel.

This car isn’t finished, so some interior switches are missing, but in the production car everything is carbon fibre and there’s just a tiny bit of padding on the dash. It just shows how much a hybrid’s batteries weigh that this car still tips the scales at 1,400kg.

The figures are still scary enough, though: 0-62mph in under three seconds, 0-124mph in under seven seconds and 0-186mph in less than 17 seconds. So it’s with some trepidation that we hit the button that wakes the 727bhp 3.8-litre V8 and 176bhp electric motor.

With an open race track, it’s not long before we give in and mash the accelerator to the floor. We thought the 12C was fast, but the P1 is on another level. The electric motor fills in the turbo lag, so there’s just a ferocious, unrelenting hit of acceleration and a ‘pachow pachow’ as the huge turbo wastegates pop off.

It’s rear-wheel drive only, but has the grip of something with four driven wheels, and in corners this car just holds on to the road like nothing else. There can be a lack of involvement from cars as capable as this, but you always seem to know exactly what the P1 is doing underneath you. If you do get carried away, you’ve got the electronic aids to catch you, but they never feel as though they’re interfering.

It’s an incredible car and we haven’t even touched the Race mode yet – we’ve been in Normal or Sport. As soon as you hit the Race button, you feel it all hunker down by 50mm, as the rear wing also extends out by 300mm. It increases the roll stiffness of the suspension by a massive 300 per cent, too, transforming what was previously a surprisingly supple car into a rock-solid one. Going round bends pulling as much as 2g is an experience you’ll struggle to find anywhere else.

After a long day on track, we slot it into E-mode and cruise around on electric power. Even now, the P1 feels hot hatch fast, and it can travel up to 100mph. McLaren says you can make six miles on electricity alone, then plug it in for around two hours to charge it up.

The electric motor works almost like a supercharger in how it delivers power, too, so if you didn’t tell people it was a hybrid, they wouldn’t notice.

It boosts fuel economy, with an expected figure of 30mpg-plus. If you need to know just how impressive the P1 is, consider this: I just bought one. It’s yellow and black just like the car in these pictures, and I doubt I will ever get bored of it.

US TV host Jay Leno owns over 100 of the rarest cars on he road, so is well qualified to give his verdict on the McLaren P1. His collection ranges from steam-powered cars to Bugatti Veyrons. Check out his video below.