The new Porsche Cayenne Coupe rivals the BMW X6, and is on display at the 2019 Shanghai Motor Show 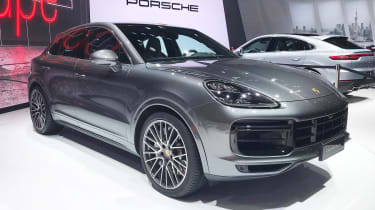 Porsche has released a coupe version of its Cayenne SUV, and it's made its public debut at the 2019 Shanghai Motor Show. Priced from £62,129, the new model will reach UK showrooms in May this year, tasked with muscling-in on the BMW X6’s market.

The Cayenne Coupe’s styling adheres to the coupe-SUV rulebook. At the front, it’s almost identical to the standard Cayenne, but the roofline from the B-pillar back has a steeper rake and the rear window tapers more sharply towards the rear bumper. Other revisions include a fixed roof-mounted wing, an adaptive tailgate-mounted spoiler and flared wheel arches.

Two engines will be available from launch. As standard, the Cayenne Coupe will come with a turbocharged 3.0-litre V6 petrol unit with 330bhp and 450Nm of torque. Like the standard model, it will send its power through an eight-speed automatic gearbox to all four wheels, offering a 0–62mph sprint of six seconds and a top speed of 150mph. 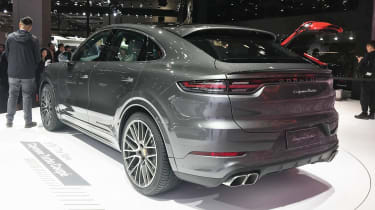 For £104,729, buyers can opt for the Turbo Coupe with a twin-turbocharged 4.0-litre V8 petrol, with respective power and torque figures of 534bhp and 770Nm. The engine is lifted from the current Cayenne Turbo, along with its transmission and four-wheel-drive system, claiming a 0–62mph sprint of 3.9 seconds and a top speed of 177mph.

Although not available at launch it’s likely that a plug-in hybrid version of the Cayenne Coupe will eventually be offered borrowing tech from the regular model.

Inside, the Cayenne Coupe gets a pair of eight-way adjustable sports seats, a 12-inch infotainment system, a centre-mounted rev counter and a digital gauge cluster. The rear bench has also been reworked and now only features two individual seats, while the whole car sits 30mm lower to the ground over a standard Cayenne

Do you think the Porsche Cayenne Coupe will be a sales hit? Let us know in the comments section below... 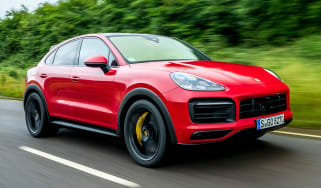