We test the latest, brightest LED inspection lamps to help you work on your car 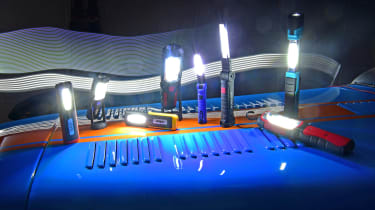 Advances in battery and LED technology have seen huge steps forward in worklights, with cordless convenience and huge outputs from small packages. While our current winner costs just £30, its rivals can be twice that, so what is there for the DIY mechanic on a budget? To find out, we set a limit of £20 and went out to see just what that buys. We gathered eight from makers and online sources to see if they were great savings or false economies.

Our test mimicked the one for more costly worklights, measuring beam brightness and width, assessing the torch, plus looking for a good range of mounting options. We also wanted to see battery-state and charge indicators, and took into account charging options. Run time was also measured down to a preset light limit, and we factored in weight, and cost from online sources.

We often have identical products being separated by just paint or sticker changes, but they’ve never topped a test. Yet here Rolson and Sealey win our test with good all-round performances. The bigger but similar Wolfteeth takes the final podium spot with impressive brightness and run time. 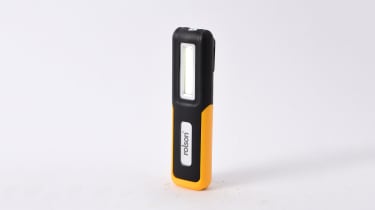 There’s a compact neatness about the Rolson’s design that ticks a lot of boxes in this test. At 15cm long, it fitted easily in place in our under-bonnet test, while the hinged base (which moves 180 degrees) allowed us to get light where we needed it thanks to a strong base magnet.

There are five LEDs monitoring the battery and charging, plus it features a torch that’s more than an afterthought. The charging lead is short, at 50cm, and there’s no mains adaptor, but at this price this is a joint winner. 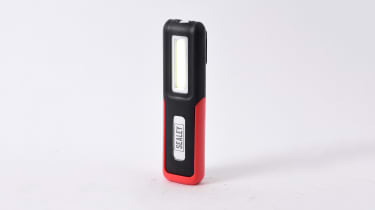 Swap Rolson’s yellow base for a red one, slap on another sticker, and you have our joint winner from Sealey. We could not separate the two through our dozen or so criteria. They even ducked out of the run time test within a minute of each other, at just over 2.5 hours.

The pair might not claim the same performance – Sealey boasts 250 lumens, Rolson 150, and 100 and 50 for the torch respectively, but we couldn’t see the difference. With pennies between them, we couldn’t even separate them on price. 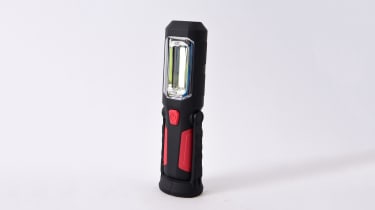 The design obviously has links with our top pair, but this is a more substantial unit, at 21cm. This counted against it in the under-bonnet test, and it lacked the solid feel of the winners. It missed the battery-state monitor, too, but there was a charging light.

Handily, there was a low-power mode to extend its run time, which was already good, at four hours. The charge lead was a useful 95cm long, but the weedy torch prevented it from toppling our top two. 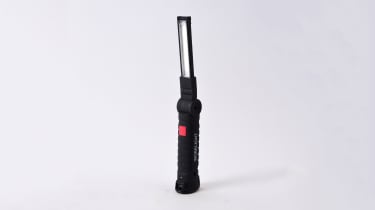 Amazingly you get two of these folding lights for your money, and the price had dropped £3 between us buying and testing them, which  suggests it is pretty volatile. Even at the original figure, the pair still costs under £20 and should give pretty much endless light, with one charging while the other is in use.

There are obvious links with the winner of our main worklight test from Ring, but while this blade folds, it does not twist. It also has a poor torch and no battery-state indicator. The beam is good, though, and there’s not only a low-power option, but also red and flashing modes. 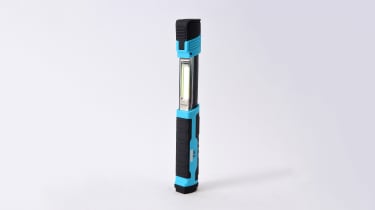 Uniquely here, this Ring unit is a telescopic design, with the 270-lumen, 3W COB (chip on board) LEDs coming on when the light is extended. And they work well, delivering one of the brightest beams on test, as well as one of the widest. A little light leaks to the side, which can be annoying, but it illuminates well for just over two hours before needing reviving.

Measuring 28cm when fully extended, it’s not as easy to place under the bonnet as some rivals, although we did like the hinged torch, which worked well. 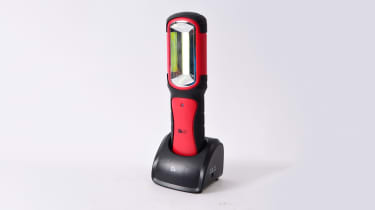 A major design flaw prevents this otherwise good worklight from challenging the leaders. That flaw? You can’t stand it up or on its sides, because they are rounded. So unless you are going to hang it by its hook or mount it on the weak magnets in the rear, you’re holding it. Madness. Plus there’s no torch.

That’s a shame given this Diall comes with a mains dock, USB lead and 12V plug, offering three ways of charging the 2Ah battery. That was good enough to outlast all its rivals here by some margin, topping a staggering eight hours. 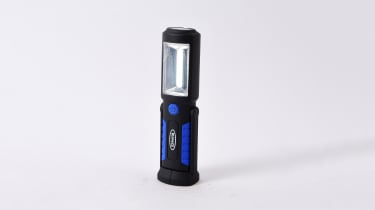 The bloodline to our winners is clear here, with another 180-degree hinged base and a powerful magnet. That’s backed by one on the rear too. Add in the fact this is a similar size to our top two, and you have another unit that’s easy to place and get light where you want.

However, the beam was bright but comparatively narrow, making it less effective at lighting a wide area, plus the torch was poor. There was also no way of knowing the run time remaining, although It had a charge indicator, and its power lead was more than a metre long. 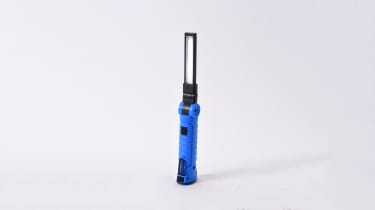 Buying online can be a tricky business, because you rarely get any idea of size. Had we known how small this Draper light is, we might have reconsidered including it in this test. But it costs a similar amount to its rivals even if it is just 11cm tall, so it stayed.

It might be pocket-sized – and there is even a clip for one – but it certainly packs a punch, although it’s a little off rivals here. It also has a decent torch, and is great for positioning under the bonnet. Where it really loses out is run time: it failed to last an hour.

Now you can see what you are doing, why not see which is the best socket set on sale to get the job done?