The Proton Gen-2 is a dated budget family car rival to the Vauxhall Astra, and comes as a five-door hatchback or four-door saloon 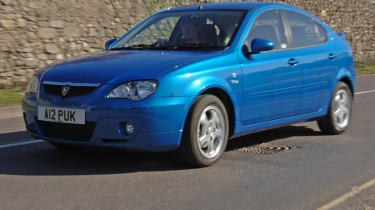 The Proton Gen-2 is sold as a hatchback or saloon, and is positioned as a cheaper rival to family cars like the Ford Focus, Vauxhall Astra and Hyundai i30. It's very dated, though. Buyers have a choice of GLS, GSX and Persona specifications, while cars badged ecoLogic are dual-fuel models – Proton is now the only manufacturer to sell a car with a factory-fitted conversion to run on liquid petroleum gas (LPG), which is cheaper than regular unleaded petrol. All models have fairly attractive styling, although the interior feels old-fashioned and is distinguished by cheap materials and poor quality. The Gen-2 isn’t the most exciting car to drive, either.

Proton developed the Gen-2 with the help of Lotus, and the car is reasonably agile through corners. But on the road, it feels a few generations behind the likes of the Ford Focus and Vauxhall Astra, as well as the Hyundai i30 and Kia Cee’d, with body roll a real issue through corners and the ride suffering from a lack of composure, especially at low speeds. There’s a choice of 1.3-litre and 1.6-litre engines, and the 1.6 is the better choice, delivering stronger performance, although it can become noisy at speed and is held back by an ageing five-speed gearbox.

The Proton Gen-2 sells on value, and is considerably cheaper than the Hyundai i30, Kia Cee’d and Chevrolet Cruze. But when you look at what you get for the money, rivals are more tempting. Air-conditioning and rear parking sensors are included as standard, but leather is a £1,000 option and Bluetooth also has to be specified as an extra. The engines’ green credentials betray the dated feel of the Gen-2 as well. The 1.3-litre is slightly cleaner and more efficient than the 1.6, but both trail the best in class by a long way in terms of fuel economy and CO2 emissions.

The Proton Gen-2 is a rare sight on the road, although its styling is quite attractive. The hatchback and saloon have remained unchanged since 2007. GSX and Persona models come with 16-inch alloy wheels as standard, while 15-inch alloys have now replaced the steel wheels on the entry-level GLS. GSX hatchbacks feature a sporty tailgate design and Persona-spec saloons are marked out by a boot spoiler. The cabin has a rather dated layout, and the cheap plastics and poor-quality finish give away the budget roots of the Gen-2, although all models now come with air-conditioning as standard.

Boot space is competitive for the class, with Persona-spec saloon versions of the Proton Gen-2 offering a 430-litre boot. This expands to 860 litres with the rear seats folded. Drop the back seats in the hatchback, and its 460-litre boot grows to an 850-litre maximum capacity. However, there are no clever touches in the load area – like bag hooks or underfloor storage – to make it easier to use, while the opening is quite narrow on the hatchback and saloon, so loading awkward items is tricky. In the cabin, cubbyholes and storage spaces are in short supply, plus drivers have to reach for some of the switchgear.

As the Proton Gen-2 hasn’t proven an especially strong seller, it hasn’t featured in our annual Driver Power owner surveys, so its reliability record – and owners’ overall satisfaction with the car – is difficult to judge. However, Proton has built up a decent reputation for reliability over the years, and sells the car with a standard three-year/60,000-mile manufacturer’s warranty. The Gen-2 features driver and passenger airbags, as well as side impact protection, although it has never been crash tested by Euro NCAP, and a stability control system can’t even be specified as an optional extra. This is a real disappointment. 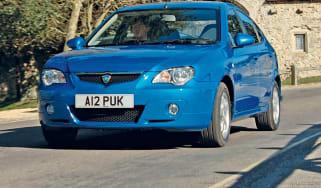 Next to well priced, capable rivals, the Proton Gen2 has little to recommend it
Skip to HeaderSkip to Content