The Chevrolet Cruze is cheap to buy and run, but basic cabin and noisy diesels dent its appeal 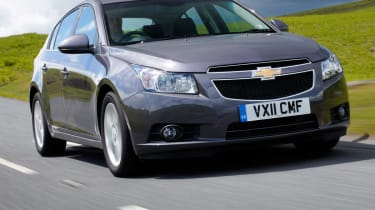 The Chevrolet Cruze is based on the same platform as the Vauxhall Astra and so is a rival for small family cars such as the SEAT Leon and the Volkswagen Golf.

Value for money is one of the main selling points of the Chevrolet Cruze - with base models having a starting price of under £15,000. Prepaid servicing deals and a five-year warranty also offer peace of mind. It is a practical car, too, with decent boot space despite its compact dimensions.

The Cruze is robustly engineered and well built, but the interior lacks the quality and polish of more mainstream rivals like the Skoda Octavia.

There are three specification levels on offer - LS, LT and LTZ - and buyers can choose either from 1.6 or 1.8-litre petrol engines or a 1.7-litre diesel. The petrol engines come with either five-speed manual or a CVT automatic gearbox, while the diesel has a six-speed manual.

Buyers can also opt for the four-door Cruze saloon or the SW estate, but the hatchback makes most sense.

There are three engines to choose from in the the UK Cruze line-up, two petrol and one diesel. The ancient 1.6-litre naturally-aspirated unit is best avoided, while the quicker 1.8 still feels slower and more asthmatic than the pokey diesel. Both petrol engines are quite boomy, thanks in part to them having just a five-speed and not six-speed gearbox.

The 1.7-litre VCDi diesel is much better, with plenty of mid-range torque and relatively low CO2 emissions as well.

However apart from the strong diesel engine, the Cruze has few positive dynamic qualities. While the clutch and gearshift are light and easy to use, the steering feels completely numb. The car can tend to understeer in faster corners and the ride is jarring and much too firm. Overall it's simply not as fun to drive as the Ford Focus or Mazda 3.

To make it worse, road and wind noise is very high at motorway speeds and the tinny cabin makes any long journey a wearing experience.

The 1.7-litre diesel engine offers the best fuel consumption and lowest emissions, at 62.7mpg and 117g/km respectively. We would definitely recommend it over the noisy and apallingly slow 1.6-litre petrol which has a combined fuel economy of 42.8mpg and high CO2 emissions of 153g/km which will mean a comparatively high tax bill.

Like for like, the Chevrolet Cruze is about £2000 cheaper than the equivalent Vauxhall Astra, so low list prices and generous deals mean the Cruze is cheap to buy, while the excellent five-year warranty and pre-paid servicing deals means it's cheap to run, too. Leasing deals can be tempting as well, so keep an eye out on the Chevrolet website for the latest manufacturer deals.

What is a concern, though is the Chevrolet's poor residual values, but that can be off-set by haggling for a big discount - or buying a used model, where the first owner has taken the initial hit in value.

The Chevrolet Cruze is unlikely to win a prize in a beauty pagent. While there are shades of the smart Citroen C4 in its appearance, on close inspection, the car's detailing lacks the appeal of its mainstream rivals, while the hatchback rear looks awkward when compared to the better proportioned saloon. It can’t match the sleek Kia Cee'd for kerb appeal thanks to its gaping front grille and bulbous rear end. If you like the look of alloy wheels, you can get 16-inch on LT cars and 17-inch wheels on top-spec LTZ cars.

The designers have been more ambitious inside. The sweeping dashboard looks more distinctive than some, while the ice blue instrument lighting and leather-trimmed three-spoke steering wheel aim to give an upmarket air. The fabric-covered dash panels though won't be to everyone's tastes, however.

And any premium feel is undermined by the use of some low-rent materials and the patchy fit and finish, though. And while standard kit includes air-con, electric windows, cruise control and parking sensors, there’s no USB music input and Bluetooth is only available on top spec models.

At 413 litres, boot space in the Chevrolet Cruze is pretty decent - about on a par with the Citroen C4, but access is easier in the Chevrolet. Fold the rear seats down and you'll get 883 litres, which is generous but not class-leading, and the seats don't fold flat into the floor, either - you are left with an annoying lip. The saloon has a 450-litre boot, which is 60 litres smaller than the boot in a Volkswagen Jetta.

There is plenty of space in the rear – even for taller passengers and if you don't use the middle seat, there's an arm rest that folds down which also has a couple of cup holders. Storage in the cabin is reasonable, with a practical glovebox, decent door pockets and more than 10 cubbies and storage areas.

The Chevrolet's modern underpinnings mean that the Cruze is a strong car. It was awarded a five-star score by Euro NCAP in its stringent crash tests, and all cars get six airbags and traction control as standard.

The Cruze has proved reliable and while the current model didn't feature in our 2013 Driver Power satisfaction survey, the Vauxhall Astra on which it is based placed a pretty poor 103rd. The interior is cheaply finished and touch points like catches on cubbies and the glovebox are particularly flimsy. 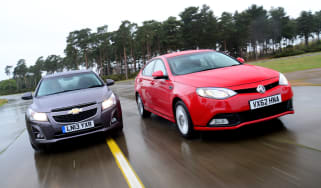 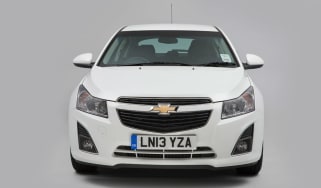 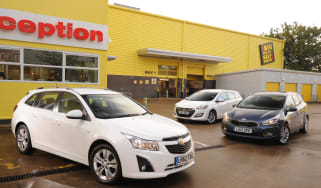 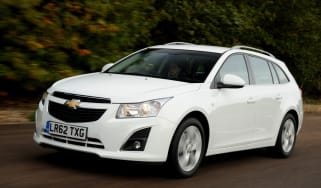 The Chevrolet Cruze SW estate is the third bodystyle in the Cruze line-up, and offers lots of space and low running costs
Chevrolet Cruze vs Skoda Octavia 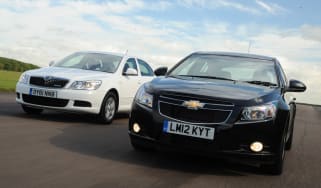 The Octavia is a top choice for family buyers on a budget. But does new diesel engine make the Cruze a better option?
Chevrolet Cruze SW 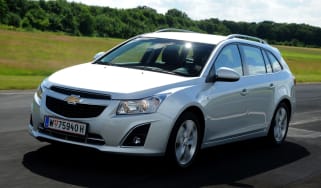 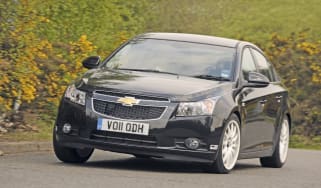 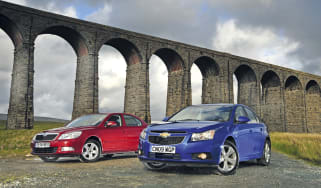 Can Chevrolet cross from bargain brand to big name player with its new Cruze saloon? We test it against its arch rival the Skoda Octavia to find out.
Skip to HeaderSkip to Content