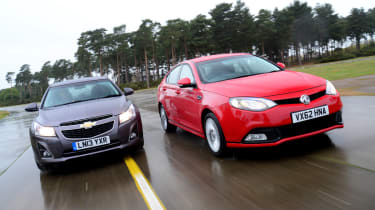 It’s been a rocky start for the rejuvenated, Chinese-owned MG brand. The MG6 hatchback arrived in the UK in 2011, and although sales have slowly gathered pace on these shores, the single petrol engine choice has pegged the car back.

To redress the balance, the company introduced a 1.9-litre diesel to the range in 2013, and constant development has seen this engine improve its economy and CO2 emissions figures. Add in a bargain price tag and a generous amount of standard equipment, and this roomy hatchback has a lot going for it. So we’re giving the MG6 a run for its money by testing it against the Chevrolet Cruze.

Even though the Chevrolet brand is to be axed in the UK at the end of next year, the five-door Cruze – which shares a platform with the Vauxhall Astra – still offers a tempting mix of bargain pricing, generous space and a decent list of kit. So can the revised MG6 diesel make an impact? Or does the Cruze still have the right blend of talents to take victory?

Build quality Both cars are well built and rattle-free, but it’s the perception of quality that lets the MG down. The buttons and rotary controls have a flimsier feel than the Cruze’s switches.

Even more disappointing is the MG’s key. It’s designed like an Audi key, so it fits into a slot in the dash and doubles as a starter button, but it’s extremely lightweight. The Chevy uses GM’s standard jack-knife key, and feels far heavier and more substantial in your hand. 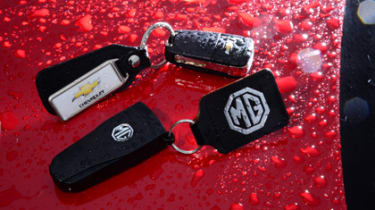 Neither model is very clean, and the MG’s 20 per cent company car tax banding is similar to some 2.0-litre diesel automatics. A lower list price puts the Cruze – which sits in the 18 per cent bracket – even further ahead.

While these cars offer similar practicality, the MG6 has more kit, including sat-nav, a USB connection, tyre pressure monitors and rear parking sensors with a reversing camera.

One thing these cars have in common is their limited options. The sole upgrade on the MG is metallic paint (£495), while the Cruze offers metallic paint (£445) and an electric sunroof (£550). For more kit, you need to move up the range to TSE and LTZ trim respectively – and again the MG has the edge on price and spec.

The Chevrolet Cruze arrived in the UK in 2009. It was initially offered as a saloon, with this hatch introduced in 2011. The 1.7 VCDi diesel launched in 2012, and is offered across the three-model range. We tested the £18,115 mid-spec LT.

Overall, the Cruze just about wins this test. It has a reasonable amount of standard kit for the money, plus similar performance to the MG6, but uses higher-quality materials and delivers better emissions and economy figures. However, in a class where excellence is the norm, the Cruze doesn’t really stand out.

The MG6 was introduced three years ago, and marked the dawn of a new era for the British brand. The five-door hatch is assembled at MG’s historic factory at Longbridge, W Mids, from kits built in China, although the design and development was done in the UK. The 1.9 DTi-Tech diesel was created in-house, and a recent update saw its emissions reduced and economy improved. Here we try the mid-spec SE model.

It was close, but the MG6 doesn’t quite hit the mark. Highlights include a big boot, roomy interior and sharp handling. Material quality could still be better, though, and cleaner engines are needed, too. Progress is being made in that area, and MG could fill the void left by Chevy when it leaves the UK in 2015.