Next to well priced, capable rivals, the Proton Gen2 has little to recommend it 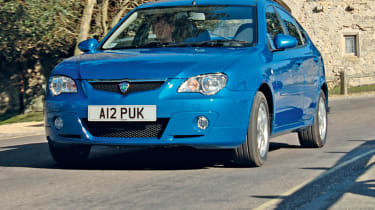 In the compact family car class, substandard models have nowhere to hide. With Kia's Cee'd showing that cheap motors needn't be shabbily built or offer only average dynamics, the Gen2 is well behind the competition. You should look elsewhere or opt for a nearly new Ford Focus. Next to well priced, capable rivals, the Gen2 has little to recommend it.

Buying a new car on a tight budget used to mean shoddy build quality and a woeful driving experience as standard - but not any more.

These days, greater choice and increased competition mean that, for less than £11,000, there's a raft of capable, bargain-priced hatches within reach. Among them is the revamped version of Proton's Gen2, which is launched in the UK this week.

The Gen2's biggest attraction is its sleek styling. Despite a look that dates back to 2004, the Malaysian five-door still has sharp lines at the front and neat curves at the rear. To avoid detracting from the shape, the only external change on this most rec­ent incarnation is the wheels. New 15-inch alloys are now standard.

It's inside where Proton claims to have made the most significant revisions. Despite design input from Lotus, the original Gen2 interior used dreadful plastics - some of which were tinted beige. Thankfully, the old-fashioned colour scheme has now been replaced with darker materials throughout. Black leather upholstery is even fitted as standard.

However, we would have prefer-red cheaper cloth trim and an upgrade to the dash quality instead. The plastics used feel brittle and dated, and while some aspects of the design are welcome - such as the neat stack of three climate control dials - the overall ergonomics are a letdown.

For instance, even though the driver's seat is height-adjustable, the low steering wheel makes finding the perfect position a challenge. And interior quality isn't exactly enhanced by the optional Bluetooth telephone connection, either. It's a useful feature, but the huge dashboard buttons resemble those on a child's toy!

Changes to the way the Gen2 drives are few and far between. Pro-ton is keen to point out that its chassis is developed in conjunction with Lotus, and as a result the hatch is more agile than you might expect. The steering provides little in the way of feedback, although the car does at least offer a decent compromise bet­ween ride and handling.

Around town, however, the suspension struggles to cope with potholes, and only at speed is the ride smooth. Body roll is limited in corners, yet the Proton handles with the finesse of a car from 1997, not 2007.

The Gen2 is available with 1.3 or 1.6-litre petrol engines. With no diesel option, the larger CamPro unit is our pick, but it is coarse at high revs and delivers wheezy performance.