Whilst the Proton isn't technically a bad car, it does look and feel dated 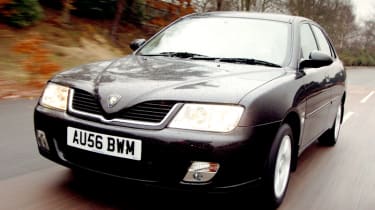 Dated Impian needs more than just a subtle makeover to rival the best offerings in this class. It does provide plenty of space and a half-decent drive, but the competition makes it look and feel old. Its main appeal lies in its value for money – but even that argument is hard to justify. While it’s relatively cheap to buy, the Proton is likely to retain less than 30 per cent of its value after three years, so we would prefer a nearly new rival instead.

If you are in the market for a new family car, it’s unlikely that the name Proton will be at the top of your list.

Despite the fact it owns a large slice of Lotus, and even produces a range of fuel-efficient petrol engines, the Malaysian firm has never looked worthy of direct comparison with mainstream rivals. So can the new Impian change all that, and match the Ford Focus and Renault Mégane?

Early indications are not good. From the outside, you’ll need to be clued-up to tell the differences between this car and its predecessor. The front and rear light clusters, as well as the grille, are all fresh. This, plus revised alloys, and an expanded colour pallet can’t disguise the Impian’s boxy saloon car looks.

Most of the changes come inside, with a revised dash and smart dials. However, the trim quality is poor, with cheap switchgear and hard, shiny plastics dominating the Eighties-inspired cabin. Even the standard leather trim can’t lift the mood, and our test car’s questionable brown colour combination only made matters worse.

At least there’s lots of space front and rear – including a decent 410-litre boot – and it all feels well constructed. Turn the key and the raucous 1.6-litre engine immediately makes its presence felt. The unit is unresponsive, too, which is a pity, as the Lotus-tuned chassis is grippy and the gearbox positive.

There are other niggles, too; even though air-con and traction control are standard, there are only two airbags and a lacklustre three-star Euro NCAP crash test rating. Poor residuals complete the underwhelming package. It seems Proton still has some way to go before it can join the family car elite.