To celebrate the 10th Renault 4L International Festival, the French brand has built an electric version of the classic Renault 4 Plein Air 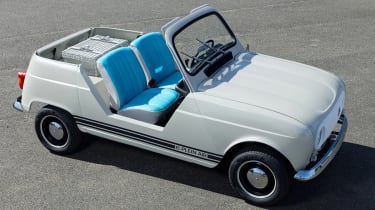 Renault has built an all-electric version of the classic Renault 4 Plein Air to commemorate the 10th anniversary of brand’s 4L International Festival. The event is an international celebration of the Renault 4 and all its derivatives, held annually in Thenay, France at the Circuits du Val de Loire.

The door-less and roof-less Renault 4 Plein Air was developed in 1964 for the French Army but, as it was less capable and more expensive than the Citroen Mehari, a military contract never materialised. It eventually found use as fun beach car for the general public until the model was discontinued in the 1970s.

Renault Classic’s all-electric e-Plein Air features the same 6.1kWh battery pack and 17bhp electric motor as the Renault Twizy quadricycle. Little has been revealed about the e-Plein Air’s specs but Renault’s preliminary testing suggests it should have similar performance figures to the Twizy, with a range of 62 miles and a top speed of 62mph.

Renault has also reworked the e-Plein Air’s styling, with a shortened wheelbase, a new, blanked-off radiator grille, revised indicators, modern badging and a new livery for the car’s side skirts. Its interior has also received a lift, with new seat covers, fresh carpets, a rear-mounted picnic basket and a digital gauge cluster, also borrowed from the Twizy.

Currently, Renault has no plans to put the e-Plein Air into production. However, the French brand says it will remain attentive to public response, potentially providing a production variant if customer demand is high enough.

What are your thoughts on the all-electric Renault 4 e-Plein Air? Let us know in the comments section below…