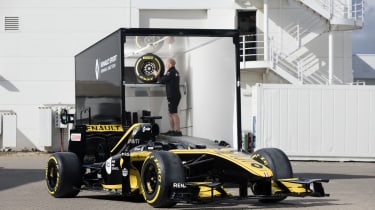 The Renault Sport Formula One team has revealed a new one-car transporter for its racing machines, which is based on a specially converted Renault Master. It's a joint venture between Renault's F1 team and the Renault Pro+ commercial vehicle division, and is designed to demonstrate the possibilities available to customers when using the Renault Accredited Convertor service that's offered at Pro+ dealers.

It's based on the standard front-wheel-drive Renault Master Platform Cab and is powered by Renault's punchy 168bhp 2.3-litre four-cylinder twin-turbodiesel. The fabricated body was designed to the F1 team's exact specification, and was built by Renault-accredited convertor Advanced KFS. The spec includes a 10.6 KiloNewton electric winch and tailor-made access ramps that accommodate the low ground clearance of the F1 cars. A payload of 844kg is on offer, which is more than enough for a 700kg racer or the engine-less show cars, which weigh only 350kg.

The converted Master offers greater flexibility when it comes to transporting show cars to locations across the UK and Europe. The Renault F1 team has 20 show cars at its disposal, many of which are last year's racing cars with the current F1 livery, and with their engines removed. In the past, transporting these vehicles would mean arranging a car and trailer or even using one of the F1 team's 40-tonne articulated lorries. But as the Master comes in under 3.5 tonnes, it can be driven on a car licence. Even better is the fact its relatively compact dimensions mean it's easier to maneouvre on-site than a truck or trailer. 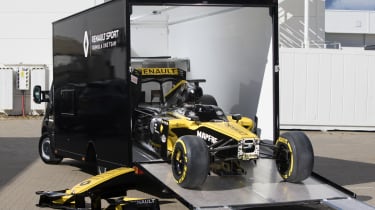 Once on site, the Master can be loaded and unloaded in around 15 minutes by one person. The front and rear wings need to be removed to get the F1 car into the load area, but the ramps can be raised and lowered electrically to take the strain out of getting the car into place. And because the Master is so quick to turn around, it's even been used to transport the racing cars when needed, including a trip from the team's HQ in Enstone, Oxfordshire to Valencia in Spain.

Tim Baston is the man in charge of Renault Sport F1's static show cars: “Having the transporter has made a major impact on the efficiency of our show car operation," he said. "It’s constantly out at events, going as far afield as Spain, France and Belgium, and its ease of use means we are saving in all areas, particularly in manpower as only one person is now needed, which allows us to enjoy financial gains in travelling expenses and also grow productivity back at base.”

“The sheer speed in which the Master can be loaded and out on the road also allows us to take advantage of last minute opportunities in terms of transporting our vehicles for additional purposes, while there’s also been a great deal of positive feedback on the actual drive and the quality of the conversion. It’s simply made moving our show vehicles a whole lot easier and more cost-effective.”

Read all our Renault van news and reviews here...