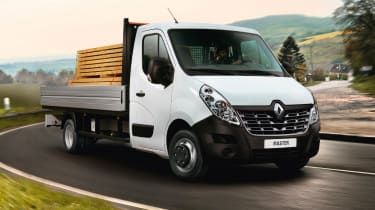 Two new versions of the Renault Master large van have been announced, and they're available now at Renault's Pro+ van dealerships across the country. The Aluminium Tipper model is based on the Master Chassis Cab, and as the name states, the load bed is now made from aluminium, and is prepared by Renault-approved conversion company VFS. It joins the conventional steel tipper models in the range, but its lighter construction means that payload is boosted by up to 150kg over the steel tipper variants.

There are single and double cab versions of the Master Aluminium Tipper available, while a secure, weather-proof tool box for storing valuables is also offered. Power comes from Renault's dCi 130 or dCi 145 diesels and front or rear-wheel-drive manual transmissions are available. Prices start from £32,300 excluding VAT.

The Luton Box Van, converted by Renault-approved supplier Truckcraft, has an increased payload over the outgoing model, while prices have been reduced. The improved load area now has a payload that's between 40 to 60kg greater than before, dependent on which model you choose, while prices have dropped by £950. As before, a column-mounted tail lift is available and is compatible with the new Luton body.

Front or rear-wheel drive layouts are offered, while dCi 130, 145 and 170 diesels are available, with the latter featuring Renault's auto gearbox as standard. Prices start from £31,850 and rise to £35,600 for the Luton Box Van, all excluding VAT.

Both the Aluminium Tipper and Luton Box Van come in Business trim, which includes height and lumbar adjustment for the driver's seat, Bluetooth, a 12V charging socket, DAB radio and electric heated door mirrors. Safety kit includes electronic stability control and ABS with brake force distribution. And like the rest of the Renault van range, all Masters come with a three-year/100,000-mile warranty and lifetime roadside assistance package.

Having trouble deciding which van you need? Read our handy guide to picking the right van for you here... 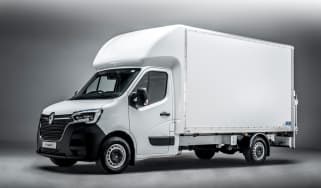