The facelifted Renault Megan range is available to order from today, priced from £16,745 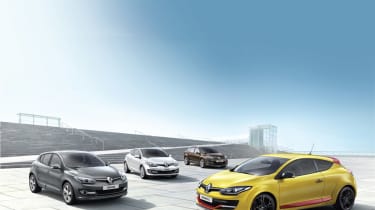 Depending on trim level, Renault says savings of up to £1,200 can be made over the outgoing Megane range.

Four equipment grades – with the exception of Renaultsport – will be available form launch, which include Expression+ (unavailable on Coupe), Knight Edition, Dynamique TomTom and GT-Line TomTom. Along with the new look, all models now get more kit, with automatic dual zone climate control standard on Dynamique TomTom, LED daytime running lights fitted to Expression+ models and R-Link now being available as an option on GT-Line TomTom variants.

Renault has also made revisions to the engine line-up, with five powertrains now being available. The 115bhp 1.2-litre petrol engine has now been added to Expression+ range, and EDC (Efficient Dual Clutch) versions of the 130bhp petrol and 110bhp diesel 1.2-litre motor have been added to the GT Line TomTom range.

A number of option packs are also available depending on model and trim level, which add features such as leather, a rear parking camera and Renault’s R-Link Renaultsport monitor.

At the top of the Megane range is the £26,925 Megane Renaultsport 265, which two thirds of buyers spec with the optional Cup chassis for an additional £1,350. The pack also adds larger 18-inch alloys, grooved disc brakes, a limited slip differential, stiffer dampers and springs as well as red brake callipers.

Available to order now, the new Megane range will make its way in to showrooms in January 2014.