While it’s hard to consider the Citroen Ami an accomplished car in a conventional sense, something so quirky and devoid of extravagance certainly has its charm. While its size makes it brilliant for tight urban driving, the lack of refinement and limited top speed will put off many. However, for users needing temporary transport through a cheap car sharing scheme, it makes plenty of sense.

This is the Citroen Ami: the French brand’s take on a mode of transport that it believes could solve the issue of zero-emission, electric urban mobility for everyone.

Available throughout Europe and with a 75 per cent chance of coming to the UK, Citroen plans for most Amis to be available through various car sharing schemes. In France, for example, it’ll be offered through the Free2Move car sharing app, where it can be borrowed for about 23 pence per minute. Those who prefer to buy one outright can still do so, for the equivalent of around £5,400.

Its classification as a quadricycle, as opposed to a car, means that in many countries it’ll be possible to get behind the wheel without a full licence.

If this all sounds rather familiar, you’d be right. The Ami follows a very similar principle to the Renault Twizy, another small French quadricycle that looks bonkers and relies on a small electric motor. Like the Twizy, the Ami is tiny: just 2.41 metres long and 1.39 metres wide. Considering that the Volkswagen up!, which is hardly a monster itself, measures 3.6 metres long and about 1.6 metres wide, then it hammers home just how dinky the Ami is. 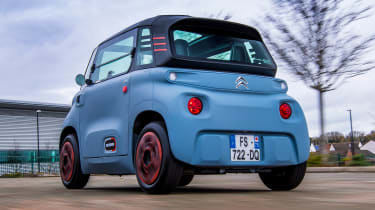 For something so small, Citroen has managed to pack in a whole heap of quirkiness to the Ami’s design. The tiny pudding bowl shape and dull grey paint manages to look both awkward yet a little bit adorable at the same time, rather like a French bulldog. Unlike the bulldog, however, it’s a bit trickier to work out which end is which: but for some different coloured light lenses and some jazzy graphics on the side windows, the Ami is almost identical from either end.

This symmetry even goes as far as the doors. One is hinged from the front, the other from the back - think of it as having two nearside doors but attached to both sides of the car. It’s totally mad, but not without some method. This extreme mirroring of parts all over the car helps to slash costs, effectively halving the number of repair panels needed - perfect for a car which, being based in urban environments, is likely to be involved in plenty of scrapes.

The cabin is equally as basic, though unlike the Twizy, the Ami can boast actual doors with proper windows - the latter make a nod to the classic Citroen 2CV thanks to glass panes which open on an upward hinge. Equipment levels have barely gone beyond those of the 2CV: there’s no airbags, infotainment systems or even soundproofing anywhere to be seen. The seats are essentially padded pieces of plastic attached to a slim metal frame (to do away with more needless complexity, the passenger seat is fixed). There isn’t even a light switch - instead, the small LED headlamps switch on with the ignition.

The dashboard, what little of one there is, has just three buttons on its fascia: one for the hazard switch, one for the rear window heater, and another for the interior fan. A small mount on the dash allows a smartphone to take the place of a traditional touchscreen navigation system, and the one digital display inside, the instrument panel, shows just the most vital information on its simple clear to read screen.

For something so small, it does feel surprisingly spacious. Most of the top half of the car is glass, giving an extremely airy feeling inside. The driving position is set quite far back into the car’s footprint, giving plenty of space to stretch out ahead. The passenger footwell is roomy enough to hold a hand luggage-sized suitcase in a special cubby. 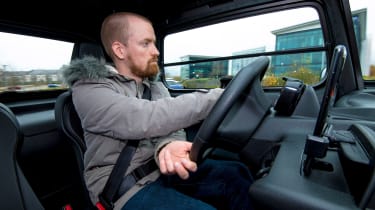 Out on the road, however, that simplicity begins to make itself painfully clear. The ride is bouncy, and overall refinement isn’t a strong point: what little road noise those 155mm-section tyres generate is amplified through the eco chamber of a big glass box. Even at 28mph it starts to get rather noisy.

We couldn’t tell you what refinement is like beyond 28mph, because that’s all the Ami has got. The tiny electric motor driving the front wheels makes just 8bhp, so performance is severely limited. While it’s understandable that few users would ever want to take the Ami out of the city, it seems a shame that, even in its element, it can’t always get to the speed limit. Fortunately, the acceleration up to that speed is perfectly fine - with just 485kg to shift, it’s nippy enough.

So is the Ami flawed? Absolutely - but despite its shortcomings, it’s very hard to deny that it’s a huge amount of fun, too. Those tiny dimensions, combined with a 7.2 metre turning circle, open up gaps in the traffic that just aren’t there for even the average superminis. It changes the mindset to closer to that of a moped rider - albeit one that doesn’t have to worry about getting rained on.

Parking is barely any trickier than on two wheels, either. With so little bodywork around the driver, it’s incredibly easy to place on the road, or park in a tiny space. The unassisted steering is a little vague, and the slow rack means that there is a lot of arm twirling involved to make progress.

Energy comes from the Ami’s 5.5kWh battery, which is good for about 44 miles of range. There’s no fast charging options though, instead plugging into a regular wall socket - resulting in a full charge in the region of three hours.