The 9-5 is disappointing, with competitive pricing failing to compensate for age-related shortcomings. 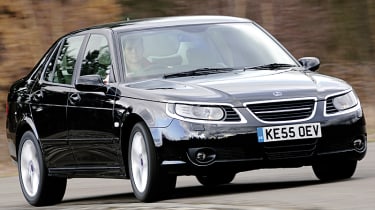 Driving On the road, the 9-5 is shaky, soggy and spongy. Even Aero models, which Saab claims have been lowered by 10mm, have a wider track and both stiffer dampers and front springs, don't show much improvement in road manners. True, the 9-5 copes well on smoothly surfaced roads, where the soft suspension delivers a reasonable ride and refinement. However, throw in a few bumps and cambers, and it's a very different story. It starts to bounce and hop, and there's too much pitch, dive and roll. As a result, you never feel quite in control, especially since the wheel seems only to have a limited say in tour direction of travel. The front wheels struggle to cope with the steering and powering the car at the same time, with toque steering being the order of the day. At least the engines are fast, particularly the turbocharged four-cylinder petrol units. The latest 1.9-litre turbodiesel is also a worthy addition, though it, like all engines, is saddled with a notchy five-speed manual - most rivals have slick six-speed shifts.

Marketplace What is Saab playing at? The strategy for its facelifted 9-5 seems to have been maximum impact for minimum cost. The Swedes claim the bodywork is all-new forward of the A-pillars, but to our eyes, it simply looks as if the 9-5 has gained some strange chrome rings around the headlights. It looks clumsy, as if it was completed in a rush - especially since so little has been done to the rest of the bodywork. But then, as a maker of an executive car outside the 'big three' of Audi, BMW and Mercedes - and, with 2005 sales of less than 3,000 cars - perhaps Saab doesn't have huge amounts of money to play with. Mind you, neither do its owners need large reserves: the big 9-5, in essence a 5-Series rival, sells for 3-Series money. A lot of car, both in saloon and estate guise, and offered in a huge array of choices.

Owning The interior is dated, tacky detailing apart. The usual plush, comfortable seats are present, but they sit occupants too high, and the steering wheel can't be raised up far enough. The proximity of the windscreen and A-pillars means the Saab feels confined behind the wheel, and that is backed up by a lack of storage and the flat-faced dash and centre console. Overall, it comes across as decidedly dated, an impression that's not helped by wipers that don't fold fully flat, some creaky trim and gearlever vibrations. But despite a relatively short wheelbase, rear cabin space is competitive, and while the boot opening is rather small, we have no complaints about the 500-litre capacity of the saloon. The estate is even more vast. Unfortunately, so is depreciation, with the big Saab retaining little more than 30 per cent of its original list price after three years. Petrol engine economy is also off the pace, and servicing costs are surprisingly high. At least it has an excellent five-star Euro NCAP crash rating.