New large Subaru SUV to take on Ascent name. New design study based on VIZIV-7 Concept previews how it will look 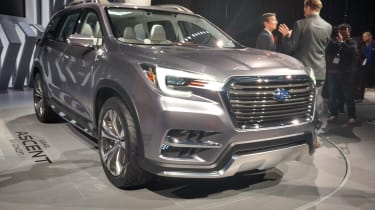 Subaru has announced that its all-new seven-seater SUV for the North American market will be called the Ascent when it arrives on sale 2018, and has whipped the sheets off a fresh design concept previewing how the car will look in American showrooms next year at the New York Motor Show.

The production model will be built on the firm’s new Global Car Platform, while under the bonnet it’ll get freshly developed turbocharged Boxer engine. Seven seats are found inside, while the interior design of the Ascent concept previews next generation Subaru interior architecture, complete with new infotainment systems. 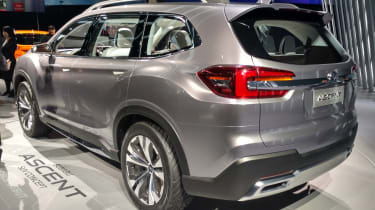 It follows on from Subaru’s VIZIV-7 Concept revealed last year at the LA Motor Show. Understandably, the design is slightly toned down and closer to production, but the car has shrunk a little in size too. It’s slightly shorter than the VIZIV-7 Concept at 5,050mm long, 1,990mm wide and 1,840mm tall, with a wheelbase of 2,970. Those figures should remain unchanged when the production car arrives.

Subaru hasn’t offered a seven seat option on the US market since the discontinuation of the Tribeca two years ago. Unlike that car and its polarising styling, the Ascent should come with appealing, tough, large SUV looks.

At the front it gets Subaru’s latest face, with a large angular grille flanked by two sleek C-shaped headlamps. The carbon-fibre cladding running around the lip of the front wheel-arches seeps forward into the front bumper assembly, and is home to hexagonal daytime running LED lights and fog lamps.

Chunky wheel arches house 21-inch wheels, and the tall, flat roofline works in tandem with a rising beltline and kinked window line so that the VIZIV-7 doesn’t appear boxy. 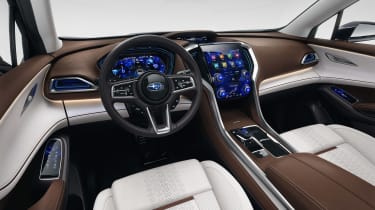 Around the back, a light strip running the width of the bootlid connects the c-shaped taillights, and hexagonal LED lights similar to the pair on the front of the car appear on the rear bumper.

Plenty of design elements – such as the use of carbon fibre for protective cladding – will be toned down for the eventual production version. The new Ascent design study now shows us a much closer to production look, and the final car won't be far off in terms of styling when it arrives on sale in the US. A release in the UK seems pretty unlikely.

Is Subaru missing a trick by not releasing a seven seat SUV in the UK? Let is know below…