The Subaru WRX STI S209 debuts at the 2019 Detroit Motor Show, but it won’t be coming to the UK 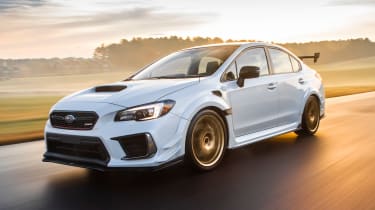 Built in the States and earmarked for American customers only, the limited edition Subaru WRX STI S209 model features a wild body kit, a huge rear wing and upgrades under the bonnet.

It’s the first “S-Line” STI to be sold in America. It borrows the standard car’s EJ25 2.5-litre, turbocharged flat-four engine, uprating it with forged pistons and conrods, heavy duty valve-springs, an uprated intake, a larger turbocharger, a fresh exhaust and an air-to-air intercooler with a water-spray system to aid cooling.

Subaru estimates a power output of 336bhp, which is 12bhp more than the last “S-Line” WRX and 36bhp more than the standard WRX STI. Full performance specifications are yet to be announced, but we’ll update you once they become available. 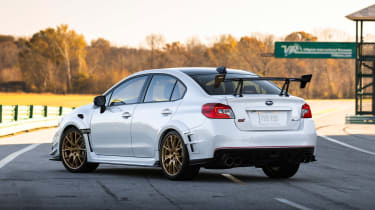 Inside, the S209 gets heated Recaro front seats, a seven-inch infotainment system, a short-throw shift kit and a suede-trimmed STI steering wheel.

Only a limited number of S209-spec WRX STIs will be built. The official production-run size and pricing are yet to be announced, but we’re expecting around 500 models will be produced, costing the American equivalent of around £45,000.

Are you disappointed that the Subaru WRX STI S209 isn’t coming to the UK? Let us know in the comments section below…