Does the new Subaru WRX STi live up to its predecessors - and can it match the new Audi S3 Saloon? 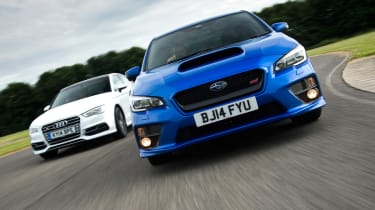 The Subaru WRX STi and Audi S3 Saloon may not seem like obvious rivals, but both have the same power output and distant rally heritage to call upon for their performance kudos.

At £33,245 with a six-speed manual gearbox, the Audi S3 is more expensive than the Subaru, but the £28,995 WRX clearly doesn't have the premium badge and upmarket cabin of its Audi rival.

With 407Nm, the Subaru has a fraction more torque than the 380Nm Audi, but it's where that torque arrives that really makes the difference. In the Subaru you've got to wait until 4,000rpm to get peak torque, whereas in the punchy Audi it arrives at just 1,800rpm. These cars have got very different characters.

There was a time when we thought the new WRX wasn't going to come to the UK but fast Subaru fans can relax - it's finally here. In an age when cars are accused of all looking and feeling the same, there's no doubting that a WRX doesn't feel or look like anything else on the road.

Performance car fans will forgive the Subaru's cabin because this car is all about the driving experience and if you've driven a WRX before then this new car will feel very familiar. First of all the boxer engine sounds the same, you've got that unique sound from about 4,000rpm as you start to work it hard.

You've got a gearbox that's got quite a short shift on each change, with a slightly notchy, quite mechanical feel, and the steering is very fast but at the same time quite light - which can be a bit disconcerting. It's also got quite aggressive self-centring, but once you get used to it you realise that that's a contributing factor to what makes this car feel so agile.

This is a car that you really will enjoy on the average British road.

The first thing you notice is when you get into the Audi S3 is the upmarket interior is in a different league to the Subaru. It's a real contrast to the dated cabin of the Subaru.

The driving experience is completely different, too. Where the Subaru is really vigorous all the time, the Audi is very relaxed: it drives like any other well-sorted fast Audi.

But the performance is there: it's got the same power as the Subaru's engine. In the Audi you've got really instant power all the time so you don't feel like you've got to work the engine so hard.

And the handling's pretty accomplished as well. The steering's not as sharp and the way that the diffs work is not as aggressive but there's plenty of traction, decent body control and the car turns in nicely. It's not a thrilling car on a road like this but it's just very accomplished.

Off the line, both cars have superb traction, but the Audi is nearly 100Kg lighter than the Subaru, and that shows by the time we reach 60mph. The S3 punches to 60 in 5.4 seconds, whereas the Subaru is 2 tenths behind at 5.6 seconds.

So which car comes out on top in our test? Well, Subaru fans will love the sound of the WRX's boxer engine and the car's unique character. But the Audi has a much nicer cabin, it was faster in the drag race and it's a nicer car to live with day-to-day. Yes, it's more expensive, but if you want a fast, comfortable and stylish performance saloon, the Audi S3 is the one for us.