As is so often the case in our Performance Car of the Year test, the smallest car isn’t always the poorest performer – and the Suzuki Swift Sport is no exception 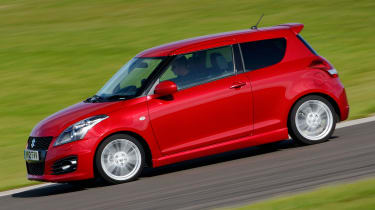 As is so often the case in our Performance Car of the Year test, the smallest car isn’t always the poorest performer – and the Suzuki Swift Sport is no exception. We’ve been running this car on our fleet since June, and it’s already tasted test victory against the latest Renaultsport Twingo – so we were looking forward to seeing if it could put on a giant-killing performance at Anglesey.

The Swift Sport didn’t disappoint. It doesn’t look outrageously different to the standard car, but it has enough hot hatch touches to stand out, such as the neat roof spoiler, smart alloys and subtle bodykit.

Inside, sports seats are the biggest departure from the regular Swift, and they do a good job of holding you in place.

Thanks to a 134bhp 1.6-litre engine and a kerbweight of just over a tonne, the Swift felt lively on the track, and a lap time of 70.9 seconds is better than many supermini hot hatches have managed in previous shoot-outs, including the Ford Fiesta Mountune and hot Twingo.

The engine loves revs, and the slick six-speed box makes it easy to keep it in its powerband. The car’s lightness means the tyres don’t work too hard, and there’s plenty of grip. Body roll is kept in check, too, and the Swift felt like it could lap the track all day.

Despite its modest power, the keys were always in demand. Whether you’re an experienced track driver or a novice, the Suzuki’s engaging character means it always raises a smile.

The Swift Sport is just as capable on the way home, too. The ride doesn’t jar, and sixth gear provides decent motorway refinement. Factor in its bargain £13,749 price, and this car fully deserves its top five finish.

Forget the Suzuki’s lap time, top speed and power output – the figure that really catches my eye is the price. At £13,749, the Swift Sport is a bargain. On the move it feels beautifully engineered, somehow combining sharp responses and superb body control with a remarkably supple ride. Then there’s the long list of kit that extends to climate control, Bluetooth and xenon headlamps.