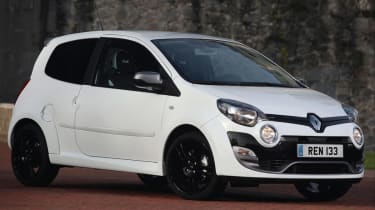 The Renaultsport Twingo 133 is a high-performance city car from the same Renault development team that produced the popular Renaultsport Clio 200 and Renaultsport Megane 265 hot hatches. It has a 133bhp, 1.6-litre petrol engine that gives it fantastic acceleration, and it's well equipped, too. There are no performance versions of the VW up! city car and its sister models the Skoda Citigo and SEAT Mii just yet, so the Renaultsport Twingo has no real rivals – except perhaps the slightly larger Suzuki Swift Sport. The Twingo RS is visually set apart from the standard model by its sporty bodykit and large twin foglamps, while behind the wheel you'll instantly notice the firmer suspension and tighter handling. This model of Renaultsport Twingo was discontinued in August 2013, although it's expected there will be a Renaultsport version of the next-generation Twingo, too.

The Renaultsport Twingo 133 is powered by a 133bhp, 1.6-litre petrol engine. As the car is so light, that's enough to power it from 0-62mph in 8.7 seconds. That puts it firmly into hot-hatch territory, although the much more expensive Fiat Abarth 500 is even faster. In addition to blistering straight-line performance, the Twingo RS boasts sharp and involving handling – the steering responds instantly and accurately to your inputs, just like in other Renaultsport models. Those who want the best possible handling can specify the optional Cup chassis, which stiffens things up even further. This does impact significantly on ride comfort however, as the Cup model in particular crashes over bumps and potholes. Plus, the combination of this harsh ride and the Twingo's five-speed manual gearbox is not ideal for sustained motorway cruising – the Renaultsport is much more at home on a twisty back road.

With cruise control, air-conditioning, Bluetooth and MP3 player connectivity all standard, the Renaultsport Twingo 133 represents pretty good value for money. Fuel economy of 43.5mpg and CO2 emissions of 150g/km mean running costs are higher than your average city car's, but still fairly reasonable for something with such exciting performance. Further good news comes in the shape of Renault's 4+ package, which includes a four-year warranty, four years' breakdown recovery and four years' servicing (the latter for up to 48,000 miles).

Distinctive headlamps and a pair of big spotlights ensure there's no mistaking the Renaultsport Twingo 133 for the standard car. It gets the usual oversized Renault diamond badge up front, plus a split tail-lamp design at the rear. Sporty touches unique to the RS Twingo include a racing-car-style rear diffuser, a roof spoiler, a bodykit and smart 16-inch alloy wheels. The driver and front passenger seats are heavily bolstered to give extra support during hard cornering, while the dashboard is finished to a higher standard than you'll find in regular Twingos. A chunky leather steering wheel and giant rev counter pod fixed to the steering column are the final sporty interior touches.

The Twingo is a three-door city car, so it's not surprising that the rear seats are a bit tricky to access and slightly cramped for adults when you get in there. However, they do slide and back and forth to offer more legroom or boot space as required: depending on what position the seats are in, the boot can hold between 165 and 285 litres. With the seats folded flat, luggage room expands to a useful 959 litres in total – more than the equivalent figure for the Suzuki Swift Sport. The driver's seat is height-adjustable, but even when it's as low as it'll go, you still feel like you're perched on top of the car rather than sitting in it. The glovebox is tiny, but there are a good few storage cubbies dotted about elsewhere in the cabin.

Renault has become know for producing very safe cars in recent years, and even the tiny Twingo lives up to this reputation. Unlike many city cars, it comes with electronic stability control as standard, and you also get side and curtain airbags at no extra cost. ISOFIX child seat mountings and ABS with electronic brake force distribution are standard, too. The Twingo is a relatively small seller in the UK, so it hasn't yet appeared in our Driver Power ownership satisfaction survey – however Renault as a whole is frequently criticised for less-than-stellar reliability, particularly in the electronics department. On the plus side, the Twingo has only been recalled by Renault once since it was launched back in 2008. 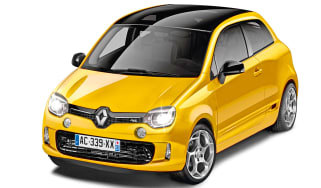 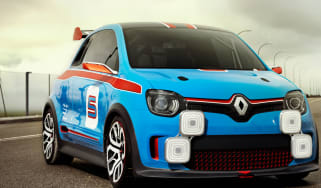 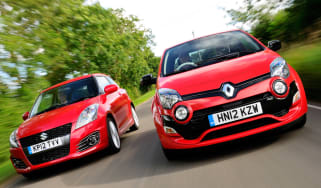 The hot new Renaultsport Twingo promises performance and fun at a bargain price. Can it beat the Swift Sport?
Renault Twingo Gordini 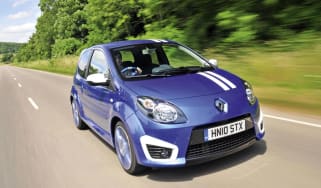 City car with famous name is all show, but not enough go...
Skip to HeaderSkip to Content