City car with famous name is all show, but not enough go... 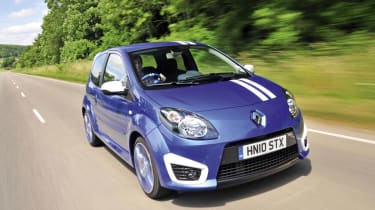 Renault’s move to revive the Gordini badge appears to be more of a marketing decision than one driven by engineers at its performance arm. The Dieppe factory Renaultsport calls home builds some of the most entertaining hot hatches money can currently buy. But the line-up is now topped by a model that’s compromised – sitting in the middle ground between sporty and luxurious. The Gordini Twingo seems an odd addition to an otherwise excellent range of hot cars.

Gordini is go! Renault has resurrected the famous name of Amédée Gordini – the man who created some of the firm’s most memorable race and road cars of the Sixties.

But bosses haven’t used it to distinguish models with more performance than the flagship Renaultsport variants. Instead, the new line-up of Gordini cars is designed to offer luxurious cabins, unique styling treatments and, of course, the trademark pair of stripes running from the bonnet to the boot. Auto Express is first behind the wheel of the new Twingo Gordini to see if the tweaks put style over substance.

The spicy city car is the first Gordini model to reach British showrooms, and it certainly stands out. Finished in Malta Blue, the car instantly catches the eye as something different from the regular Renaultsport range. Alongside the special paint and go-faster stripes, our model had the £100 optional polished 17-inch alloy wheels, which feature spokes also finished in blue. Contrasting gloss black and white adorns the bumpers and mirrors.

But the exterior enhancements should complement a beefed-up engine. Gordini made his name as a legendary racing tuner, and his reputation for extracting power from even modest units earned him the nickname The Sorcerer. So Renault’s decision to leave the mechanical parts of the car alone will bitterly disappoint true fans of the brand.

The 1.6-litre unit is willing to rev and, as with all good hot supermini hatches, the Twingo has to be worked hard to get the most out of it. But it’s not very responsive at lower revs. And when you consider that the standard Renaultsport chassis delivers such poise and grip, and the steering is so light and direct, Renault has missed an opportunity by not adding some more magical Gordini power.

The trade-off for the excellent handling is an exceptionally firm ride, which is at odds with the luxurious cabin.

The Twingo gets plush black and blue leather seats, an MP3-compatible stereo and automatic headlights and wipers – all things that you’d expect to feature in a larger model.

But most buyers would also expect a car that wears so many Gordini badges to be more of a stripped-out thriller.