The Suzuki Swift Sport provides pocket rocket-style driving thrills to match the MINI, but costs a fraction of the price 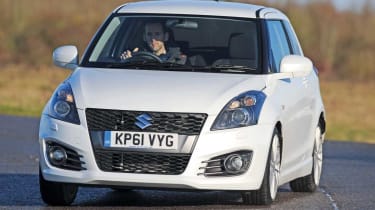 The Swift Sport is available in both three and five-door bodystyles – although both lag behind the best in class for space and practicality. There’s plenty of room for those sitting up front, but the rear bench lacks legroom for taller passengers, while access to the back is tight on three-door cars. However, the Swift Sport’s Achilles heel is its tiny boot. At 211 litres with the rear bench in place it’s actually smaller than those of city cars such as the Skoda Citigo and Hyundai i10. That said, this lack of space is less of a problem on the driver-focused Sport than it is on more run-of-the-mill versions.

What the Suzuki’s interior lacks in room, it more than makes up for with quality and standard equipment. Most of the plastics used are hard, but they’re of decent quality and are solidly constructed. Elsewhere you’ll find the switchgear feels robust and operates with precision, the fabrics used for the chunky sports seats are hard wearing.

Equally impressive is the car’s standard kit list, which would shame many executive saloons costing three times as much. For instance, all versions get keyless entry, a touchscreen sat-nav, climate control, Bluetooth connection and high intensity discharge headlamps.

The only fly in the ointment when it comes to Sport ownership is the car’s relatively high CO2 output. With no stop-start system the 1.6-litre Suzuki emits 144g/km, which doesn’t compare well with either the MINI or Ford Fiesta, which are closer to 100g/km.

The Suzuki Swift Sport is a hot hatch back that delivers sparkling handling, spirited performance and great value for money. Designed to rival warmed over supermini models such as the MINI Cooper, Renault Clio GT-Line and Fiesta Red/Black, the Suzuki combines plenty of driving fun with remarkably low running costs.

At the heart of its appeal is a high-revving 134bhp naturally-aspirated 1.6-litre petrol engine that delivers strong performance thanks to the Suzuki’s combination of low kerbweight and close-ratio six-speed manual gearbox.

The Swift Sport also features lowered and stiffened suspension, making it even more entertaining to drive than the already engaging standard car. Once again the car’s low weight pays dividends, allowing the Suzuki to dive through a series of corners with acrobatic agility.

The 1.6-litre engine in the Swift Sport delivers 134bhp, and when it’s pushed it provides the sort of screaming soundtrack that will get hot hatch fans excited. The naturally aspirated unit feels a little limp at low speed, but it comes on strong once the revs rise past 4,000prm. As the Suzuki weighs only 1,045kg – around 100kg less than a MINI Cooper – straight-line performance is exhilarating, with the car blasting from 0-62mph in only 8.7 seconds and hitting a 121mph top speed. 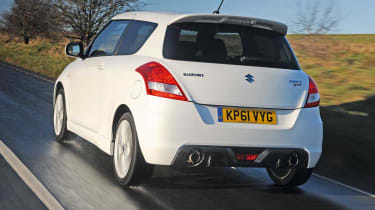 And because the suspension is stiffer than in the standard Swift, and the steering sharper, the car loves to be pushed through corners, where body roll has been virtually eliminated. The snappy shifts of the standard six-speed manual gearbox only add to the driver appeal.

Yet this fun-loving personality doesn’t come at the expense of everyday usability. Thanks to a relatively tall top gear and decent suppression of wind and road noise the Swift Sport is surprisingly composed on the motorway. And while the ride is firm, it’s never uncomfortable thanks to the car’s finely honed damping.

The latest Suzuki Swift Sport doesn’t only offer better performance than its predecessor; it’s also more efficient. The 1.6-litre engine returns a claimed 44.1mpg fuel economy and emits 147g/km of CO2 – the 134bhp MINI Cooper is far cleaner with 105g/km CO2 emissions so won’t cost so much in road tax or company car tax, but it costs nearly £2,000 more to buy.

You also get more for your money with the Suzuki - MINI customers pay extra for Bluetooth, climate control and metallic paint, all of which comes as standard on the Swift Sport. Better still, our experts have calculated that both the three and five-door versions of the Suzuki should hold onto around 50 percent of their new value after three years.

There’s no mistaking the Sport for a standard Swift, thanks to its racy bodykit, 17-inch alloy wheels and twin exhausts that poke out from the deeper rear bumper.  Further enhancements include privacy glass for the rear windows, a tailgate spoiler and high-intensity gas discharge headlamps. The Swift is also now available in both three and five-door bodystyles.

The sporty theme continues inside, where you’ll find a pair of heavily bolstered front seats, metal finished pedals and red stitching for the steering wheel, seat trim and gearlever gaiter.

In other respects, the Swift Sport isn’t much different to the regular hatch, but that’s no bad thing, as you get a decent driving position and a well laid-out dash with a high-quality finish. There isn’t much in the way of soft touch plastics, but the materials used are decent quality and robustly constructed.

The Suzuki Swift Sport is less than four metres long, and has a wheelbase of 2,430mm, so space inside is at a premium – especially for passengers in the rear. Access to the rear bench is tight in the three-door car, so buyers who regularly carry passengers will be better off with the five-door models.

Perhaps the biggest disappointment is the boot, which delivers a cramped 211-litre capacity with the rear seats in place. Fold the rear bench flat at the amount of space available extends to just 512 litres. At least the five-door car gets a handy 60/40 split/fold arrangement – the three-door machine has to make do with a single piece arrangement. 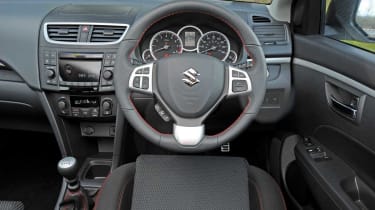 Happily the rest of the cabin is more user-friendly. For instance, there are cupholders in the trim on each side of the rear seats, plus a further one up front, as well as a decent-sized glovebox. There’s also a deep cubby ahead of the gearlever, which also contains a USB socket and 12V power supply.

The standard Suzuki Swift has been awarded five stars in Euro NCAP crash tests, and the Swift Sport comes with a comprehensive list of safety equipment. Seven airbags are included as standard, as is stability control and brake assist, while in the rear are ISOFIX child seat mountings.

Like many Japanese manufacturers, Suzuki also has an excellent reputation for reliability, while the previous Swift has been a decent performer in our Driver Power satisfaction surveys over the years. As a result, there’s no reason to suspect the Sport will be anything other than trouble free. Most of the major components are shared with the standard car, while the 1.6-litre petrol is the tried and tested unit from the brand’s SX4 S-Cross and Vitara models.