GT-Line trim promises to distil some Renaultsport magic into the standard Clio with a punchy 1.2-litre turbo 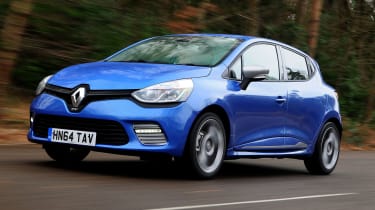 The warmed over Clio looks good on paper and in the showroom, but it fails to live up to its promise. The main culprit is the lacklustre drivetrain, which features a limp engine and a gearbox that lacks the smooth and decisive changes of the best units. It's a practical choice, but can't quite match the sporting credentials of sportier rivals.

With its bold styling, practical interior and generous amount of standard kit, the latest Renault Clio certainly stands out in the crowded supermini sector. Yet it’s been undermined by lacklustre driving dynamics and patchy build quality.

However, two years on from its launch, any niggles should have been ironed out, while the sporty GT-Line edition promises to distil some of the flagship Renaultsport model’s strong performance and sharp handling into a more affordable package.

The Clio comes close to matching the most attractive superminis for kerb appeal. With its rounded lines, vast headlamps and bulging rear wheelarches, the Renault has clearly been designed to attract attention. And while there’s no sporty three-door option, the sloping roofline and hidden rear door handles help give the car a sleek, coupé-like profile.

The sporty theme continues inside, where you’ll find a pair of heavily bolstered front seats, a chunky three-spoke steering wheel and aluminium-finish pedals – you’ll even spot a number of GT and Renaultsport logos.

Elsewhere, the cabin is standard Clio, so it’s neatly designed and well laid out. The classy gloss-black centre console is dominated by the standard touchscreen infotainment system. Yet while the interior looks more upmarket than the Ford’s, many of the plastics feel low rent. Still, there are few complaints about the standard kit, with sat-nav, keyless entry and power-fold mirrors all included. 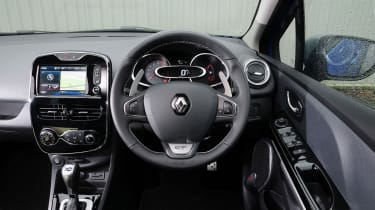 In an effort to boost the GT-Line’s hot hatch credentials, Renault has entrusted its development to its legendary Renaultsport department. That means it gets stiffer springs and dampers than the standard car, plus the addition of the R.S. Drive function from the Clio RS 200, bringing meatier steering weighting, sharper throttle response and quicker changes for the twin-clutch gearbox.

Also available is the £295 R.S. Monitor, which lets you view an array of performance-related data, such as engine inlet temperature. It’s slightly gimmicky, but is sure to appeal to the younger drivers Renault hopes to attract. Yet despite these upgrades, the Clio is a bit of a mixed bag. Body movement is better controlled than in a Fiesta, but unlike the Ford, the Renault never feels much fun. While you can carry lots of speed through corners, there’s little feel and almost no ability to tailor the car’s line by tweaking the steering and throttle.

Yet the biggest criticism is reserved for the engine and gearbox. Not only does the 118bhp 1.2-litre turbo feel flat in its power delivery, it’s accompanied by a dull drone – it’s possible to play meatier engine notes through the stereo speakers using the R-Link sound effects function, but the synthesised sounds are very artificial. 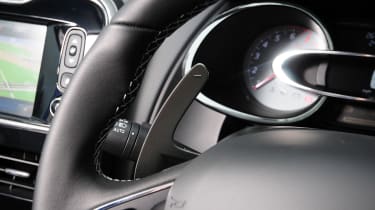 The Renault is further hobbled by the six- speed twin-clutch box, which is a little jerky and lethargic off the line in automatic mode, and slow to respond when manual changes are required. Worse still, the column-mounted shift paddles feel cheap and don’t have a positive enough action, so you’re never sure whether your request for a gear has been registered. It seems best to leave the transmission to its own devices, because once the Clio’s up and running the gearchanges are smooth – although it can hang on to lower ratios.

In recent years Renault has worked hard to shake off its reputation for poor reliability and flaky build quality. As a result, the manufacturer finished 15th overall in our Driver Power 2014 survey. Despite some cheap plastics, the Clio felt robust, while the mechanicals have been tried and tested in other models in the range. But it’s worth noting that our car’s touchscreen infotainment system temporarily failed, leaving us with no sat-nav or radio functions. 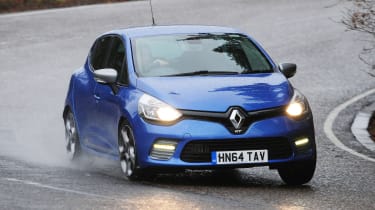 In terms of safety, though, Renault has ensured the Clio is well equipped. The car has six airbags and tyre pressure monitoring, plus a five-star Euro NCAP score.

It’s not the fastest or most fun warm hatch, but the Clio is spacious. Larger exterior dimensions translate into fractionally more room for rear seat passengers, while the five-door layout means access to the back is much easier. The Renault also features a generously sized 300-litre boot, which is extended to 1,146 litres with the 60:40 rear bench folded flat.

When it comes to storage, not only are its door bins smaller, the Renault’s glovebox capacity is compromised by having to accommodate the fusebox. On the plus side, there’s a handy tray ahead of the front seat passenger, plus a couple of cup- holders set into the transmission tunnel.