Elon Musk has put his old car into space, launching the Tesla Roadster towards Mars on his SpaceX Falcon Heavy rocket (yes, really)… 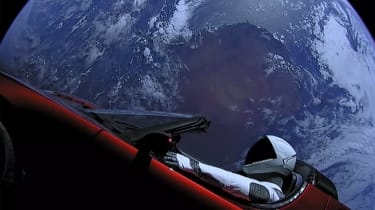 Tesla CEO Elon Musk has launched his Tesla Roadster sports car into space. The car, complete with a mannequin wearing a space suit sitting behind the wheel, was positioned on top of the SpaceX Falcon Heavy rocket and blasted out into the solar system at 8.45pm UK time on Tuesday 6 February. This is not a joke.

Amazing images beamed back from cameras onboard the Tesla show the car gliding past the Earth, the dummy in the driver’s seat with its arm propped nonchalantly against the wind frame and the dashboard touchscreen bearing the legend ‘Don’t Panic’ - a reference to the Douglas Adams sci-fi book, Hitchhiker’s Guide to the Galaxy.

As a commercial for for Tesla and Musk’s commercial space operation SpaceX, the stunt’s value must be huge. The launch was streamed live on the SpaceX YouTube channel and footage has since been picked up by media outlets across the globe. "The imagery of it is something that's going to get people excited around the world, and it's still tripping me out,” said Musk after the launch.

In more practical terms, the launch of the Falcon Heavy rocket has been eagerly anticipated because it represents SpaceX demonstrating its ability to put heavy objects into space. "It means we're able to offer heavy lift… for not much more than the cost of a Falcon 9," he told reporters, underlining that the new rocket is a significant step forward from SpaceX’s previous vehicle. "If we're successful in this, it is game over for all other heavy-lift rockets."

In the run-up to the launch, however, Musk was keen to play down the rocket’s chances, saying that for the mission to succeed the rocket would need to perform a highly coordinated “aerial ballet” and that there was a “good chance” that it would explode on take-off. 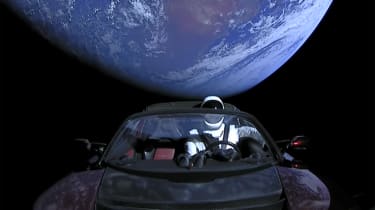 In the event, not everything went according to plan. The Tesla Roadster was intended to be sent on a path around the sun that would take it out towards Mars orbit, but it appears to have overshot the intended trajectory and the red soft-top is now said to be on its way towards the asteroid belt between Mars and Jupiter.

The launch of the Tesla Roadster into space is a final spectacular swan song for the car which is about to be superseded by the all new Tesla Roadster unveiled last year. The new electric supercar is due on sale in 2020 with 10,000Nm, a 1.9s 0-60mph time and a 250mph top speed, which is considerably slower than the space-going Tesla will be travelling as it plots its way out into the infinite blackness of space.

This story is completely true, but you’d be forgiven for thinking it wasn’t. Read some of the best April Fools’ Day jokes from car companies… 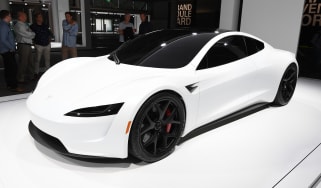 The upcoming, all-electric Tesla Roadster will go up against the Lotus Evija with a targeted 0–62mph time of around two seconds