Toyota has unveiled its new humanoid robot called T-HR3, which has been designed to provide assistance in difficult situations 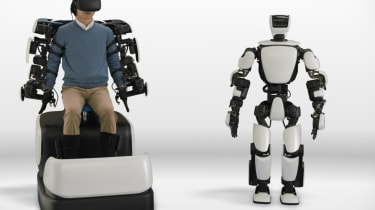 Toyota has exhibited its technological prowess by showing off a new robot, the T-HR3. The third generation humanoid robot has been designed to provide vital assistance in a variety of environments – such as hospitals or outer space.

Importantly, T-HR3 is controlled from a ‘Master Manoeuvring System’ (MMS) which takes its inputs from wearable controls attached to a user's body. This gives the machine a whole host of possible applications, which could conceivably extend to medical procedures, space travel or even  cleaning your car on a cold day.

What the robot sees is fed back to the person controlling it via a headset, so the user can interpret a hazardous environment – such as a radioactive fuel dump or a snowy Berkshire driveway – and easily manipulate the robot to a successful outcome.

The robot has 29 body parts and 16 control systems within the MMS, giving it an incredibly life-like range of motion. Once more, its movement should be incredibly precise as T-HR3 follows on from previous robots which were developed to play musical instruments.

In a promotional video released by Toyota, T-HR3 can be seen picking up a ball and building lego, which is made possible by the use of force feedback. A system which replicates the interaction between an object and the robot's hand, feeds it back to the wearable controls mentioned earlier, and makes the user feel as though they are actually interacting with the object.

Sadly, there has yet to be any mention of how much a T-HR3 would cost, let alone whether they will be available for the public to buy. So for now, you will need to keep on top of car maintenance all by yourself.

Does Toyota’s T-HR3 help move us  closer to a safer world for all humanity, or is it pulling us inexorably towards Judgement Day? Let us know in the comments below…