Toyota has announced new active safety tech, including a crash prevention system, will be rolled out on new models in 2015 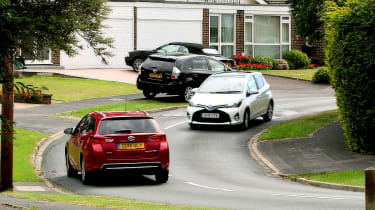 Toyota's car range is about to get more advanced as the firm introduces new active safety tech on its European models. Cars such as the new Aygo and Yaris, plus the next-generation Auris and Avensis, will be available with a 'Safety Sense package' when they appear later this year. Among the features will be a 'Pre-Collision' crash avoidance function.

The Japanese manufacturer is playing catch-up with rivals such as Ford and VW who have recently introduced crash detection and prevention systems on their latest models. Toyota's Safety Sense tech will be available (either as standard or as an optional extra) across 70 per cent of the UK range by the end of 2015. 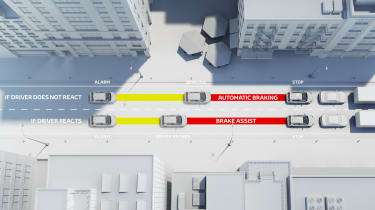 As with other set-ups, the Pre-Collision System (PCS) uses cameras and radar scanners to detect objects in the road ahead that the car is likely to collide with. Audible and visual warnings prompt the driver to hit the brakes, and the system can then automatically apply the anchors, bringing the car to a halt. PCS operates between 6mph and 50mph.

More expensive models in the range can be fitted with an advanced milimetre-wave radar that allows PCS to operate right up to the vehicle's top speed. It also enhances the Adaptive Cruise Control system, monitoring vehicles crossing lanes to keep the car cruising smoothly. 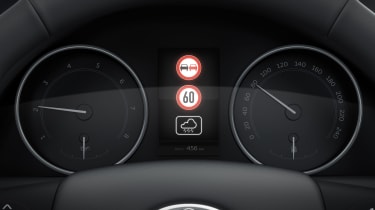 Plus, Automatic High Beam uses the same sensors to dip the main lights when it sees oncoming traffic and the Road Sign Assist function stores all speed or road warnings, letting the driver know if limits are exceeded. Toyota claims cars fitted with Safety Sense will attract lower insurance premiums as the system reduces the risk of a crash.

Toyota previously unveiled plans for innovative tech that lets cars communicate with each other to increase safety further, but we don't expect to see this in action until at least next year.

Now check out our round-up of the safest cars currently on sale...