Toyota is aiming to build self-driving tech into production cars by 2020. We tried its two latest prototypes in Tokyo...

Toyota is planning to launch autonomous driving in its cars by 2020 to coincide with Tokyo hosting the Olympic Games– and Auto Express has tested a prototype. As a passenger, we sampled the so called Mobility Teammate Concept system in a Lexus GS on a busy public highway in Tokyo.

Our car was fitted with an advanced, pinpoint accurate satellite navigation system, a forward facing camera next to the rear view mirror, and LiDAR (laser and radar object detectors). The LiDAR sensors were mounted in the middle of the front bumper and on either side facing out at 45 degrees. There were also three other LiDAR units in a similar arrangement on the rear bumper. Combined, these allow the car to know exactly where it is on the road and asses the location and speed of surrounding vehicles. This information is then processed by an on-board computer which controls the steering, throttle and brakes to manoeuvre the GS safely through traffic.

The Lexus GS Mobility Teammate Concept test vehicle was only authorised to drive autonomously on a small section of the Tokyo highway. Once we hade entered the permitted zone, the system alerted the driver that autonomous operation was possible though a audible alert plus a visual message on the infotainment screen. The driver then pressed a button on the steering wheel, giving control to the car's self-driving tech. 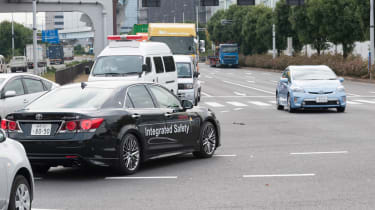 The car then indicated, and steered left to join the main carriageway, all by itself. Later it changed lane to let faster moving traffic past. As we reached the end of the permitted autonomous driving section of the road, the car indicated to filter off to the right and exit the highway. This required a change into the busy traffic of the righthand lane and then, immediately, a move right again to join the slip road. While performing this complex manoeuvre the system appeared to hesitate for a moment before pulling itself together itself without the need for the ‘driver’ to intervene.

A Toyota engineer explained that the autonomous system was still in development and more work was required to fine-tune the software to ensure it runs smoothly in such tricky situations. On any production version, this could even include a warning to the driver, that a difficult junction is ahead which may require them to take control. Other updates could include attention detection software for the driver, to make sure they haven’t fallen asleepbehind the wheel and are ultimately still in control.

Overall, the autonomous system performed fairly well, though changes will be made before it goes into production cars. Engineers are aiming to reduce the size of the LiDAR units as the ones fitted to the test GS were about the size of a box of Malteasers and didn't do much for the car's styling. Toyota will also need to reduce the cost of the components to make autonomous driving commercially viable. It believes the tech would not only take the stress out of commuting but make it safer too. And from our experience with this impressive prototype system we are in little doubt the Japanese firm will achieve its target of 2020 to bring a commercial viable and publicly useable system to market. 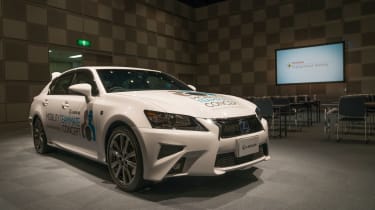 As well as automated driving, Toyota has released another drivers’ aid in Japan that’s designed to enhance safety at tricky junctions. Called ITS (Intelligent Transport System) it uses wireless technology to prevent collisions at intersections where poor visibility prevents a car’s on board sensors from detecting hazards – such as when a vehicle is turning right at a busy crossroads. Cameras and radars positioned at road junctions survey the area and relay the information via radio waves to a sensor in the car. The system can then warn the driver if there is unseen oncoming traffic or a pedestrian crossing the road they intend to turn into via a visual alert on the dash and a warning sound.

The local government funds the infrastructure, while the in-car tech is available at a cost option for £140 on three Toyota models, including the new Crown that we tested it in. It’s the first system in the world to use infrastructure to detect the hazards at junctions and while other vehicle manufacturers have tested prototypes of car-to-car communication, the idea of using roadside sensors means information is shared with everyone not just between vehicles of the same brand. 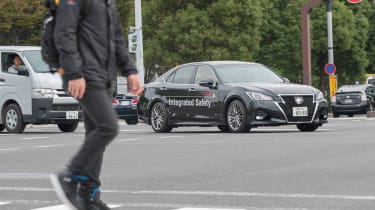 Once again we experienced the system in action on the road in Tokyo. Our Crown test vehicle attempted to turn right at a junction fitted with the detector. When the driver released the brake to move across, the system warned of oncoming traffic that was obscured by a large bus in front. Once the way was clear our driver proceeded to make the manoeuvre, however, the warning went off again, even though there was no approaching vehicle or obstacle in the direction we were heading.

Our engineer explained the sensitive detector had picked up the fact a motorcyclist was parked on the pavement at the junction. This raised a potential issue with the technology. While there is no doubt it works and could dramatically help cut accidents at busy junctions, if the systems is too sensitive and overly cautious, drivers will begin to ignore its warnings, and this will limit its usefulness. Once again the system will continue to be developed as more junction sensors are rolled out – with hundreds expected to be in place in Tokyo ready for the Olympic Games in 2020.

Find out more about the latest self-driving car technology here...