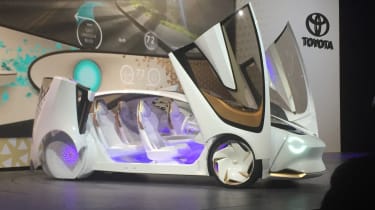 Toyota has pulled the covers of its Concept-i car at CES 2017, explaining that the futuristic design aims to put the driver’s needs ahead of technology.

The Concept-i is Toyota’s vision for 2030 driving where the car will be a home on wheels although much of the tech showcased is expected to be introduced on Toyota models that we’ll see a good bit before that.

The heart of the Concept-i is the in-car artificial intelligence, dubbed Yui. The virtual companion is designed to learn your characteristics, traits, dislikes and likes using sophisticated biometrics and becomes smarter the more you drive. 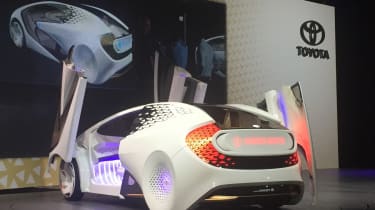 Yui can hold conversations with drivers to keep them alert or warn them of upcoming dangers. It’s represented throughout the concept as a ball of light with the idea that it can travel around the car to be where it’s needed.

That means information can be displayed “wherever, whenever” via either the 3D head-up display, the dashboard or even the seats.

We tested the system at CES going on a virtual drive around San Francisco with the help of Yui. During the journey the AI suggested nearby points of interest and looked out for potential hazards even when we were in control.

When switching to self-driving, the seat automatically reclined and provided a relaxing massage while the ambient lighting and sound changed, too.

It also tracked our happiness during the journey giving an example of how Yui learns about you. Once it knows what surprises and entertains you, it'll be able to suggest more relevant points of interest and take you on a route that'll keep you the happiest.

While many manufacturers have announced partnerships with tech suppliers, Toyota has developed the entire Concept-i in-house at the Toyota Research Institute. Bob Carter, Toyota’s senior vice president of automotive operations, said: “This is our vision to drive future focus on the driver. 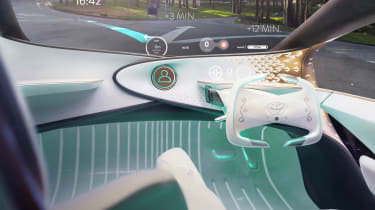 “We have an awful lot of work to do but we will be evolving many concepts and features on the road in Japan in the next few years.”

The Toyota Concept-i, sized comparativly to a modern city car like the Toyora Aygo, was designed from the inside-out with styling lines radiating from the central console to highlight how the car has been created around the user experience rather than adding tech onto an existing platform.

The unique covered rear wheels provide a suitably futuristic look while inside, the cabin is simplistic, spacious and airy aided by a huge glass screen running up the front and the transparent scissor doors.

The Concept-i and Yui don’t just communicate with the driver, either. Illuminated panels and a rear end that can display text allow the vehicle to talk to pedestrians and other drivers. Exactly what the messages will be is presumably down to the driver’s discretion.

Carter added: “The car and the driver become team-mates. The AI is very approachable, very clean and very intuitive. This is a really special concept vehicle.”

Have your say on the Toyota Concept-i in the comments section below...