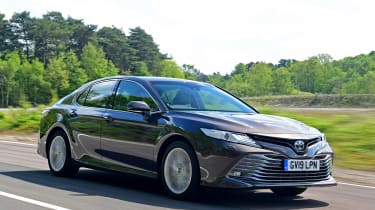 We’d not argue with anyone who chooses a Toyota Camry. It’s well built, quiet, comfortable, nicely-equipped and frugal. And those company car tax benefits can’t be ignored, either. It’s not the most exciting car to drive, but the biggest let down is the infotainment system – something that’s so important to users of this class of car. That’s a shame as it holds the Toyota Camry back from being a real class leader.

My how Toyota has changed. To be fair, we’ve all changed in the past 15 years, but now we have a Toyota that has brought us a new Supra and a range of cars that are as good to drive as they are to look at. Toyota’s results in this year’s Driver Power satisfaction survey show they’re just as reliable and easy to own as ever, too.

So, it’s a bold move to bring a large saloon car, the last of which was seen in the UK 15 years ago, back into a declining market – especially if you endow it with a name that evokes mediocrity. The old Camry was never a car to boast about – unless you were a cab driver.

The new Camry, though, is anything but mediocre. It’s a smart looking thing sitting comfortably on its 18-inch multi-spoke alloys (17-inch in £29,995 Design Trim) with its chiselled front end featuring slim LED lights. Head turning? No. Posh? Definitely. In fact, you might wonder whether the new Camry should be wearing a Lexus badge instead. 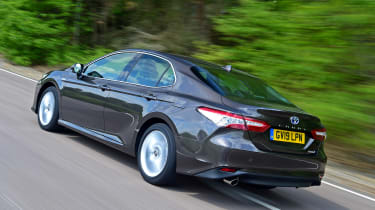 It’s a big car, too. At 4,885mm long it’s bigger than either a Volkswagen Passat or Skoda Superb, although the Vauxhall’s Insignia – a new name since the Camry was last here – is longer still.

What the Camry offers that the others don’t is a hybrid system. Plug-in hybrid versions of the Passat and Superb are coming, but the Camry does without a plug.

Toyota calls it a ‘self-charging hybrid’, much to the irritation of EV aficionados. Strictly speaking, Toyota’s right – but the hybrid system is either charged by the 2.5-litre petrol engine or by harvesting energy while the car is braking and it won’t go further than a mile or so on electric power alone. You decide who’s right. 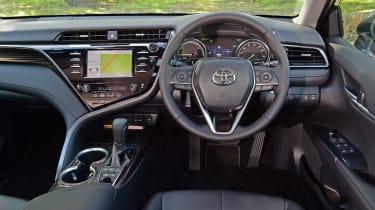 What that means in terms of numbers is 50+mpg and excellent CO2 figures which equal low (just 23% for the Design model) benefit-in-kind tax rates for company car users, who’ll make up the bulk of Camry drivers.

The good news is Toyota’s official mpg claim seems realistic – we managed 51mpg on our mix of fast motorways and country roads, then clogged urban streets. We’d probably get similar real-world figures from a diesel rival.

The 215bhp combination of 2.5-litre petrol and hybrid power means decent performance and super-quiet driving around town – you’ll be hard pushed to realise when the petrol engine kicks in – with a comfortable ride that will be music to previous Toyota owners’ ears.

You’ll have more fun in an Insignia or Passat (or Mondeo – remember that?), but that’s not what the Camry is about. You get a spacious and comfortable (in all five seats) cabin that’s built as well as anything in the class – hence the Lexus reference. And you know that, being a Toyota, it will stay that way.

The boot isn’t as big as rivals’ – probably down to the hybrid batteries - but at 524-litres it’ll do for most people.

Thankfully, the CVT auto box is no longer the Achilles’ heel it once was. Its smoothness has never been in doubt, but the engine noise produced by CVT-equipped cars of old is now pretty much absent. So performance is swift if not scintillating and the car corners flatly and without fuss. 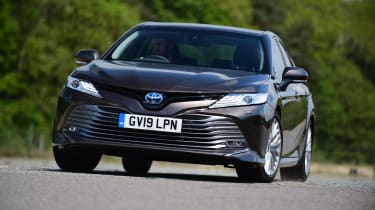 On the motorway it remains quiet although there’s a bit of wind and road noise, but generally the Camry is a calming car.

The interior follows that theme and looks good, with sweeps of chrome, wood inserts and high quality fixtures and fittings.

It’s not all good news, though. The infotainment system would have been acceptable a few years ago, but things move fast in the tech world and the Camry’s seven-inch screen seems a bit small and outdated. It lacks the Apple CarPlay and Android Auto smartphone connectivity buyers really want, too.

Otherwise, whether you choose this £31,295 Excel model or the slightly cheaper Design car, you’ll get a car with an excellent kit list including leather, alloys, a keyless system and Toyota’s Safety Sense system. The more expensive car adds some more safety kit, more advanced lights and wireless charging for mobiles.

Those prices are pretty much on a par with rivals, with the Vauxhall and the Skoda slightly cheaper, but with greater taxation benefits.