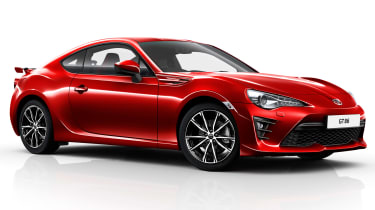 After it was shown off at the 2016 Goodwood Festival of Speed, Toyota has released further details of its 2017 GT86 facelift. The sports car receives engine and suspension tweaks, plus a mildly updated cabin.

Chief exterior changes include a bigger front grille, which helps give the car a sportier look, as well as a new bumper, revised fog light housings, LED lights and alloy wheels with an updated design. A revised rear spoiler and front splitter serve to improve aero too, and there are some new 17-inch alloy wheels.

Inside there is new leather and Alcantara upholstery including on the doors and instrument panel. The cloth seats have been updated with contrasting silver stitching as well, and there's a new steering wheel design featuring audio controls and a central '86' logo. There's a new 4.2-inch display screen next to the dials, too. 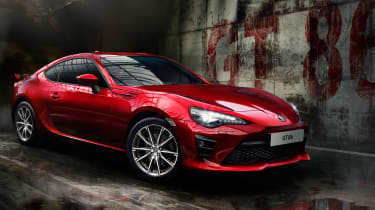 The 2.0-litre flat-four petrol engine still has 197bhp, and is completely unchanged from the model year 2016 car. The changes under the skin are to the suspension, with a few tweaks to the steering and shocks helping to improve the car's agility. The chassis has been strengthened for better rigidity, too.

Chief designer Tetsuya Tada said: “The biggest point I wanted to improve was the car’s responsiveness – on and off acceleration, turning in and turning out, and the speed and naturalness of its reactions. This has partly come from modifying the dampers and springs, but the biggest point of influence has been in aerodynamics and the way this affects the suspension.”

There's a new Track mode which can be used ot tune the car's electronic safety systems, with a 'fully off' setting for track use.The brand says the mode has been fine-tuned using data from Toyota's experience with the 24 Hours of Nürburgring.

Check out our coverage of the 2016 Goodwood FoS here...