The new Toyota Hilux GR Sport is a pick-up with sporty Gazoo Racing tweaks, but it's only available in Brazil 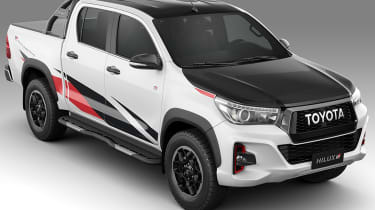 Toyota’s sporty Gazoo Racing brand has arrived in South America with this: the Toyota Hilux GR Sport. The new model was revealed at the Sao Paulo Motor Show, and just 420 will be produced for the Brazilian market when deliveries start in 2019.

The main changes to the GR Sport are cosmetic. The Gazoo Racing decal package adds stripes across the pick-up’s flanks; they're finished in either black and red (if you go for white body colour), white and red (black paint) or black and white (red paint), while a black bonnet is available on white cars.

The front grille, door mirrors and roll bars are also blacked out, while the front fog lamp surrounds gain contrasting highlights. The exterior changes are rounded off by a set of black 17-inch alloy wheels. 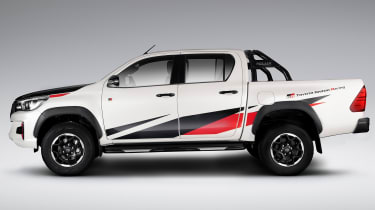 The detail tweaks continue on the inside, too. The leather seats feature contrasting red stitching and Gazoo Racing logos are stitched into the front headrests. GR branding also extend to the starter button, and a numbered plaque behind the gear selector.

The only mechanical change comes to the suspension: the GR Sport gets firmer springs and new dampers. Elsewhere it’s the same as the standard Hilux: the GR Sport is powered by a 2.8-litre turbo diesel engine (other versions of the Brazil-spec Hilux are offered with petrol/ethanol-fuelled motors too) which produces 175bhp and 450Nm of torque.

The four-cylinder unit is matched to a six-speed automatic gearbox and a four-wheel drive system with a locking differential.

Would you like to see the Toyota Hilux GR Sport come to the UK? Let us know your thoughts below... 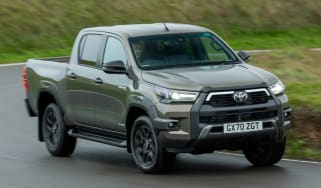 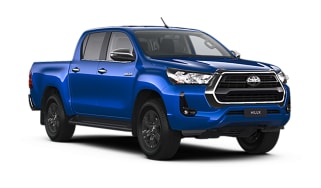